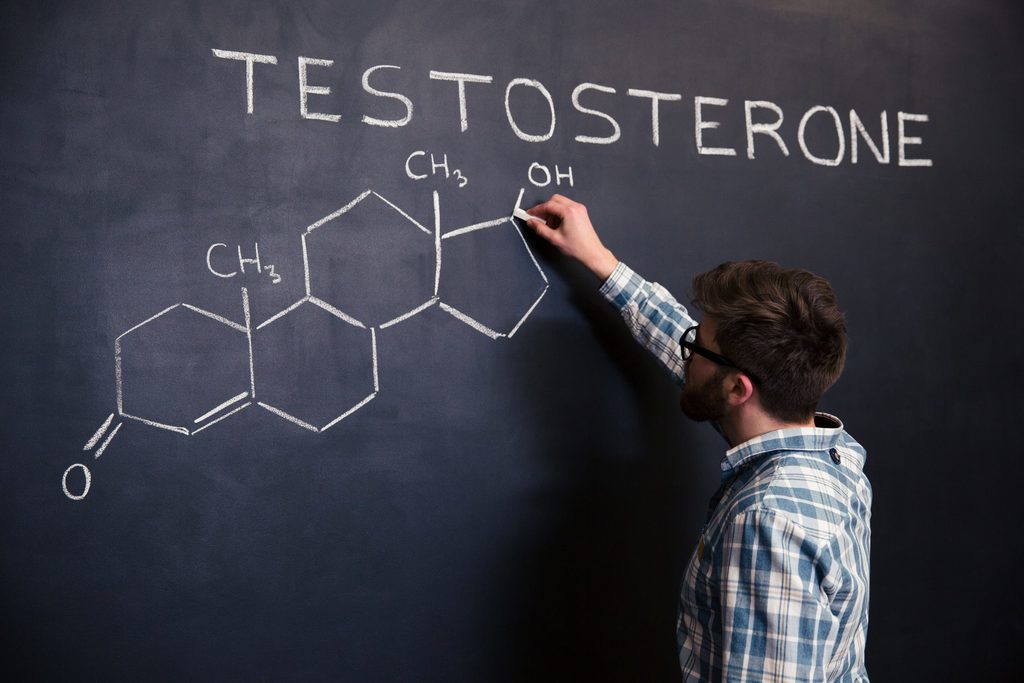 Can bodybuilding increase testosterone? The answer probably seems obvious to you, exercise increases testosterone, so does having low body fat, and don’t bodybuilders use steroids to increase it further? But actually, many long term bodybuilders struggle with testosterone production for years.

Bodybuilding can absolutely increase testosterone, provided you are training effectively, not overtraining (which can lower testosterone), and not in too large a calorie deficit (i.e. pre-competition). Studies have shown that resistance training can lead to increases in testosterone and growth hormone levels in men.

“In conclusion, the data presented here indicate that strength training can induce growth hormone and testosterone release, regardless of age”

So if you are transitioning from inactivity to following a bodybuilding program, you can expect to see improvements in testosterone production. However, if you are already lifting weights then swapping to bodybuilding would not lead to any changes.

Bodybuilding prioritises many habits that can increase testosterone. Fat loss, muscle building, increased activity, improved nutrition, and rest and recovery. But not all bodybuilders follow this. Many bodybuilders overtrain, don’t prioritise rest and recovery, and thanks to the use of anabolic steroids and other drugs, they may not feel the need to sufficiently clean up their diet.

They essentially rely on synthetic testosterone to paper over the cracks. Because the amount of testosterone (or similar) they are taking is so high, it allows them to lead a lifestyle that is not actually conducive to high testosterone production.

Testosterone is the male sex hormone. It is also an anabolic steroid. Testosterone is made in the liver. Then activated in androgen receptors, and secreted in the testes and is made from cholesterol. This is why high-fat diets have been shown to increase testosterone levels.

Men have significantly more testosterone than women, yet women do produce small amounts of testosterone and can use it for muscle growth (though they have their own sex hormones for that).

There are many benefits to having healthy testosterone levels. Better sleep, a better libido, improved mood and cognition, and hundreds of others. But the main benefit that interests bodybuilders is that testosterone is a vital component of protein synthesis.

What is protein synthesis?

Muscle protein synthesis is the process your body uses to repair and rebuild damaged muscle fibres. When you exercise, your muscle fibres break and become inflamed, this is known as muscle damage. This may sound like a bad thing, but it is exactly what you want to happen (within reason).

Your body responds by repairing and rebuilding these damaged fibres, making them stronger and larger in size (known as hypertrophy). To do this, you need to be consuming enough protein,  but you also need enough testosterone and growth hormone being produced.

Testosterone can also help you to train harder and longer, and recover better. It is for this reason that professional bodybuilders are able to train twice per day, seven days per week, and still see good results.

Basically, the more testosterone you have in your body, the more you will be able to train, and the greater the results you will see from training.

This is a highly simplified explanation by the way. So apologies to any Sports Scientists who just threw up in their mouths reading it!

The Difference Between Natural and Synthetic Testosterone

As I said earlier, your body produces testosterone naturally. Provided you are living a healthy lifestyle, with lots of sleep, a diet that is high in fat and protein, and you exercise regularly, you should have more than enough testosterone in your body.

But if you want to train at the intensity of a professional bodybuilder, and get results that are similar, you will need to supplement with anabolic steroids. There are three main types of testosterone that you can take:

In fact, it will actually lower production. This makes sense if you think about it. Why would the body produce the same level of testosterone when your body is filled with it? So production lowers, but the bodybuilder doesn’t notice because they are taking testosterone injections (or pills).

The problems can occur once the bodybuilder stops taking steroids. Their body will still not be producing enough testosterone, and may also be producing an enzyme called aromatase, that converts excess testosterone into estrogen!

Now, many bodybuilders who take steroids will point to the fact that there are ways around this. You can take anti-aromatase drugs that inhibit the enzyme, you can also manage how you take steroids to avoid too much of a drop off in testosterone levels.

But many bodybuilders don’t do this, and it is a legitimate concern.

The Long-Term Effects of Bodybuilding on Testosterone

If you follow a natural bodybuilding lifestyle then you can expect long-term maintenance of higher levels of testosterone. This is because you are creating an environment for production to thrive. Sleeping well, managing stress, eating well, exercising often, and keeping body fat levels low should all help prevent testosterone loss (though age will still affect production).

But that’s not really what you came here to read. What we are really talking about here is the effect of long term steroid use on testosterone. Sadly, the outlook is not good. In 2016, Rasmussen et al took a look at 37 current and 33 former steroid abusers.

The results were startling. Former steroid users had significantly lower levels of testosterone than the control subjects. With an average of 14.4nmol/l vs 18.8nmol/l. This is a big difference, and it had clearly affected their health. The former steroid users suffered from:

The mention of depressive symptoms is an interesting one. Particularly if you look at Pro Wrestlers, almost all of whom have used anabolic steroids. Many people claimed that Chris Benoit was depressed due to steroid abuse (though he also suffered from alcoholism). Other similar claims were made about other wrestlers.

Steroid abuse can also damage your heart, which may have caused the deaths of several ex-bodybuilders, and Eddie Guerero (pro wrestler) died of heart failure while being a known steroid user. I may be going slightly off-topic here, but I want to emphasise that a loss of testosterone production is just one side-effect of heavy steroid abuse. There are many other issues to contend with.

How To Maintain High Testosterone Levels

The first thing that you want to do, is to stay clear of steroid abuse. While there does appear to be ways in which you can have your cake and eat it, most people fail to manage this. Unless you are looking to become a professional bodybuilder, there are few reasons to risk damaging your health.

Aim to hit around 7-8 hours of sleep each night. Sleep disorders, or very bad nights, have been linked with a drop in testosterone production. Bad sleep can also lead to increased appetite and weight gain, which can further affect testosterone.

For optimal testosterone, you want a diet that provides you with enough nutrients. High in protein, sufficient fat, and carbs are also useful. You don’t want any deficiencies in vitamins and minerals. Vitamin D in particular. Vegetarians and vegans tend to have slightly lower testosterone than omnivores, due to a lack of saturated fat (remember, cholesterol is vital for testosterone).

While being lean is necessary for optimal testosterone production, being in a calorie deficit for too long can negatively affect it. So when dieting, don’t create too big a deficit, and don’t stay in it for too long! Though, for many people, this is unlikely to be an issue.

I’ve talked before about bodybuilding and testosterone, you can check out my article on it here. The purpose of this article is to find out if bodybuilding can increase testosterone. The answer is that it can. Provided you are following a natural bodybuilding program, and don’t overtrain.

At one point, this article might have appeared to be an anti-steroid article. But that’s not exactly what I believe. My belief is that steroid use can be done safely, without causing lasting damage. But that too many bodybuilders take it too far, or don’t do it properly.

There are many bodybuilders who take steroids sensibly, and their future testosterone production is unlikely to be affected. As with anything, a small minority can give something a bad name. But if you are considering going down that path, please be careful, and make sure you know what you’re doing. It can go badly wrong.