So I’m a day late with this blog (busy day painting yesterday) but I had a good week last week….

Matt came through and managed to write a new plan for our sessions because frankly, the old one got pretty stale. Last week I managed 3 sessions – 1 cardio session on my own and 2 with Matt. The first session involved all the big exercises (deadlifts – yuck, squats – yuck, bench press – yuck). In summary, I hated it! But I had a really good workout so I can’t really complain. We went for a heavy-ish weight and just 6 reps on each to really lock my technique down. Matt even drew a very scientific stick person version of me to highlight my area of improvement for the next session with the deadlifts. 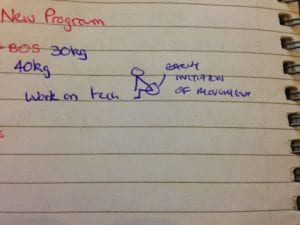 The second session was a lot more enjoyable – big girl press ups, Lat pulldown, push press, good mornings and GHR – again lower reps with a higher weight. Despite my renowned slowness and general hate for exercising and doing more than is necessary, we even had time to squeeze in some split squats (it was originally going to be walking lunges, but I was also playing Pointless on the TV and didn’t want to miss the answers – I’m a woman…we multitask!)

Another interesting addition to the sessions is the introduction of ‘back off sets’ – something he posted on his Facebook page a while back (that I might have totally missed at the time). The basic concept is to complete your sets at your normal weight and then do one final set with higher reps / lower weight, the science being because it makes you awesome….and some other sciencey stuff that Matt can insert here *** J I mainly like them because it says BOS in my book, which I have interpreted as ‘bossing it’. Feel free to adopt this!

Last week I felt pretty regretful for my step count…this week it was 57,207 which is up 11,500 steps (a good thing), but still not as high as I’d like. I do get the feeling that it will suffer over the coming winter months, as I am less inclined to walk to the gym in the dark (it involves going through woods – I’ve seen Stranger Things, I’m not an idiot….N.B. if you haven’t yet seen Stranger Things on Netflix…well you should!!)

My measurements as as followed:

Which I will take. I did feel pretty good in the week as I wore some clothes to work that I wouldn’t have dared attempted a few months ago, so this effort must be working! Now that I’ve said that, here comes the naughtiness….

I went to a Brazilian BBQ Friday night, which if you’ve been before, you will know involves a lot of meat. Skewers of meat (and a token buffet of sides) which was unlimited. The meat part was probably not that awful – protein I hear you say….well, I did serve it with 2 cocktails and 3 glasses of wine…and a full fat coke! I definitely felt remorseful for this Saturday…which might explain the take-away pizza that I had – a thin base, Italian style one…I put it in my food diary….don’t judge me! 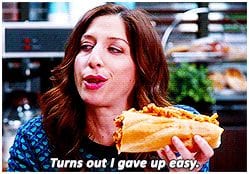 But, I am back on the horse now (p.s. if you haven’t seen Brooklyn Nine Nine – particularly this episode with the extreme diet, I highly recommend it as I can totally relate to the girls stages of diets…I realise that I’m more like Amy Santiago then I’d admit to…)

No new recipes this week as I didn’t actually do any food shopping – I survived on freezer food / last week’s shopping leftovers, but I will give you a tried and tested awesome steak and mushroom pie recipe. I utilise my slow cooker yet again for this one, as steak pie filling is always better slow cooked. This is actually an old Weightwatchers recipe of mine, but it’s a favourite. Weightwatchers recommends 6 portions, but we usually cut into 4. The macros are (based on 4 portions):

Well, that’s all folks for this week!