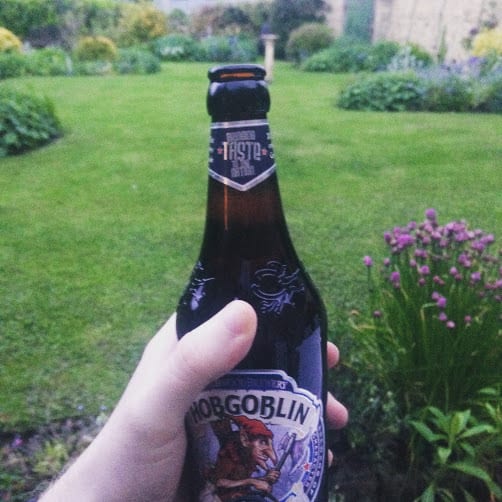 Does Beer Taste Better in a Bottle?

Picture yourself in a beautiful garden, the weather is sunny and bright. You are surrounded by your friends, somebody passes you a beer. It’s in a bottle. You take a sip. Heaven. But does it taste better than if that beer was in a glass? In this article, I will attempt to answer the question “Does beer taste better in a bottle?”.

While taste is mostly down to personal preference, it is unlikely that a beer could taste better in a bottle. To get the most out of a beer, you want to be able to inhale the aroma this is difficult in a bottle. You also want a good head and for the beer to remain at a stable temperature. Neither of which can occur in a bottle.

While I would say that beer does not taste better in a bottle, different beers will produce different results. In this article, I will look at which beers taste good in a bottle, and which ones really need to be poured into a glass.

Does Beer Taste Better in a Bottle?

Sadly, beer is not improved by being drunk straight from the bottle. In fact, several beer styles are made much worse if you don’t pour them into a glass! The main problem is the aroma (or lack thereof). If you look at a typical Belgian chalice, you will note the large surface area of the glass. The reason for this large surface area is to make it easier for you to breathe in the hoppy aroma.

Beers that are strong tasting rely on you to experience this aroma, which is why so many beer glasses are designed to allow you to stick your nose in. A bottle stops this entirely. This is not such a big deal for lagers, nor is it a problem for some pale ales. But most beers benefit from being in a glass.

Another issue is temperature. I talked about this in my article on picking the right beer glass for your beer. Having to hold a glass (or glass bottle) with your hand will lead to the temperature of the beer rising over time. You are transferring your body heat into the vessel.

That is why beer glasses with handles or stems are so useful. There are no handles on beer bottles, and as such, you may find your beer warming up as you drink.

Finally, many beers benefit from having a good head on them. This is mostly about aroma, but aesthetics also play a part. Drinking your beer from the bottle removes any chance of a head foaming. Think about a pint of Guinness, then think about drinking that same Guinness straight from the bottle. Not as good huh?

Benefits of Drinking from the Bottle

There are some benefits to drinking your beer straight from the bottle, though they don’t really make up for the downsides! The biggest benefit is convenience. You can just grab the bottle and start drinking.

No finding the right glass like some kind of nerd. No carefully washing and drying the glass beforehand. You don’t have to spend time pouring your beer perfectly into the glass, nor is there any mess to clear up afterwards. Just put the empty bottle in the recycling and move on with your day.

Beer in a bottle won’t go flat as fast as beer in a glass, and it is easy to get your beer bottle nice and cold by putting it in the fridge first, or trying the freezer trick.

But that’s about it really. Beer poured into the right glass is infinitely better than beer drunk straight out of the bottle.

Best Types of Beer to Drink from the Bottle

While the consensus of this article is that beer does not taste better in a bottle, there are a few beer styles that are not particularly affected either way. Here is a quick list of them:

Beers you Should Never Drink from the Bottle

There are some beers that should never be drunk out of the bottle, doing so would be a crime against beer!

There are probably a load more beers that don’t belong in a bottle, but you get the idea. If your beer is based around intense aromas or a specific consistency, then drinking from the bottle is not ideal.

Sure, the beer will still be drinkable, but you’re not getting the most out of it. Like purchasing a five-star tasting menu from a restaurant and eating it cold four hours later.

Does Beer Taste Better in a Bottle? The Verdict

At the beginning of the article, I talked about how your personal tastes and preferences will affect how you experience this. The picture I painted in the opening lines demonstrates why keeping it simple and just draining a bottle can sometimes be a great thing.

But for me, it is all about the experience. If I’m going to a barbeque or a bar/nightclub where the likelihood of getting a decent beer glass is low then I will make adjustments to my beer choice. I’ll go for some mass-produced lager (Carlsberg, Amstel, Heinekin, etc).

I will really enjoy my beer, ice cold and straight from the bottle. I will avoid stronger tasting beers or ones that would be ruined if drunk from the bottle. It’s about making smart decisions that suit your environment.

Sometimes a bottle of beer is a good choice too. If you are in a dodgy-looking pub which does not look in any way clean, then drinking your beer straight out of the bottle is a great idea. You know that it hasn’t been watered down or fed through bad pipes. You also don’t have to deal with a potentially filthy glass!

At the end of the day, I’m always happy with a great beer in my hand. If that beer suits being served in a bottle then so be it. You are unlikely to hear any complaints from me!

Previous Post What Beer Do They Drink in Ireland? Next Post Does Beer Contain Vitamins? Your Question Answered