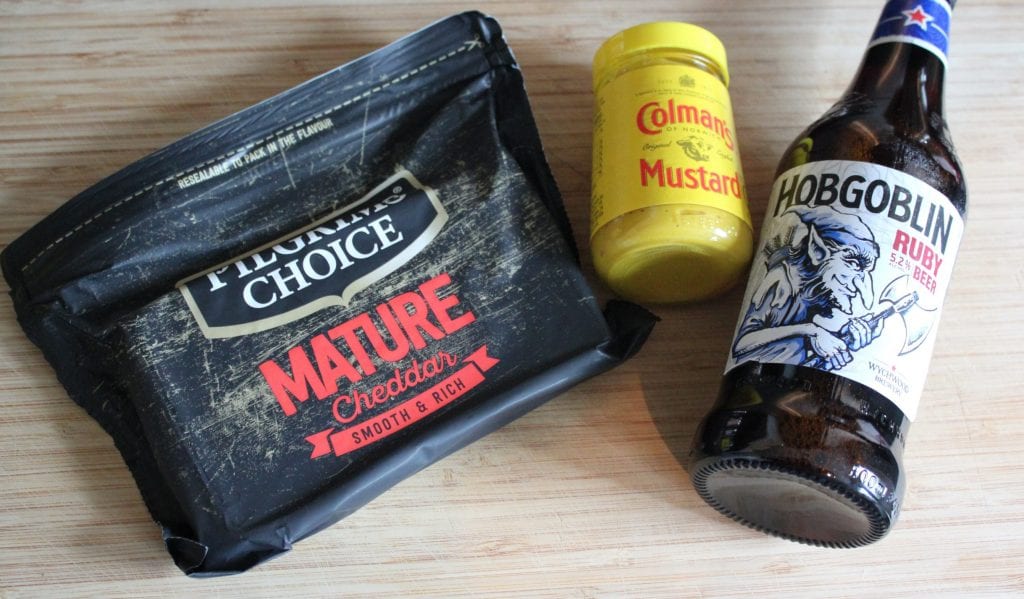 Welsh Rarebit (or Rabbit) can be made with beer mixed into the cheese. Many recipes call for a strong, brown ale to be added. Of these, I think Hobgoblin by Wychwood breweries is an excellent candidate. Or you could try a quality Welsh bitter such as The Rev James by Brains Brewery. Both go really well with cheese.

A History of Welsh Rarebit

As with many things in Britain, Welsh Rarebit makes no fucking sense! For most of its existence, it was called Welsh Rabbit, the “rarebit” part is just an affectation. The name Welsh Rabbit would make you assume two things:

While the dish is Welsh, there are also English and Scottish variants (which sound identical to me). There are also no rabbits involved. There never has been any rabbits involved, and nobody knows why it was called rabbit. That is British history in a nutshell. The first mention of Welsh rarebit is 1725, and the first mention of English or Scotch rarebit is 1747 (according to Wikipedia). This is an old dish.

What is the Perfect Beer for Welsh Rarebit 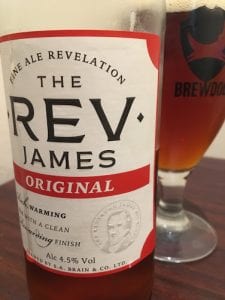 In every recipe I’ve ever seen for Welsh Rarebit, the ingredients list never specifies which beer to use. They just say “strong brown ale”. That is not particularly helpful, as there are thousands of ales that fall under that category. I decided to try a selection of beers, to see which one worked best. First I bought a Guinness. Then The Rev James (an English Style bitter brewed in Wales). And finally Hobgoblin Ruby Ale by Wychwood Brewery.

I found that the Guinness was a bit of a letdown, the taste didn’t quite go together. The choice of Rev James bitter was a simple one. Firstly, I really like the beer. Secondly, this is a Welsh dish and it should have a Welsh beer. That being said, my favourite beer to go with this dish is Hobgoblin Ruby Ale, which is as English as they come! I think it works so well because it compliments the cheese and is strong enough not to be overpowered by the mustard.

Having just finished making and eating Welsh Rarebit for this article I can say this. Cheese on toast is like Welsh Rarebit without all the fuss! Truth is that they are as different as two meals consisting of almost identical ingredients can be.

For Welsh Rarebit you are essentially making a cheese sauce, then placing it on toast before grilling it. This involves grating cheese, melting butter, stirring in flour, and adding mustard. Whereas cheese on toast is either grating or cutting slices of cheese and placing the cheese on some bread, before grilling it.

Don’t get me wrong though, Welsh Rarebit is awesome.

How to Cook Welsh Rarebit

I’m sort of in uncharted waters here. I’m not a professional chef. I know how to follow a recipe, or combine several recipes together. Which is exactly what I did here. But I can’t claim credit for the original recipe. My recipe is a combination of this recipe from Hugh Fearnley-Whittingstall, and my own incompetence. But I screwed up the recipe enough for it to be a Matt Smith creation!

(Makes around 4 dinners, or 8 lunches)

Grate your cheese first, I made the mistake of putting the butter on first and then had to get my partner to run into the kitchen and grate cheddar like a fiend! Measure out your flour and butter if you’re a square. Or just guess it like the cool kids (me).

Melt your butter in a saucepan. The BBC website said a “small” saucepan, but they clearly have different definitions of what constitutes a small saucepan than I do. Use a medium one.

Add in the flour, and stir carefully. Not crazily like I did or you’re going to get flour all over your oven and your partner will yell at you. 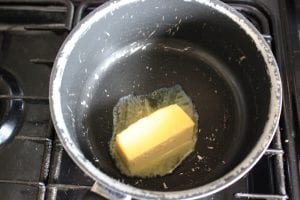 Is that 50g of butter? I don’t fucking know!

Once you’ve added the flour and it is resembling a paste, slowly start to pour your beer into the floury mess. Do it a little bit at a time. Like you would add stock to gravy. Once you’ve added half the bottle you should have a sort of thick sauce.

Now you add the cheese

Stir it in carefully and then you want to add two teaspoons of mustard. This makes the sauce taste quite strong, so adapt to your tastes. You don’t want to overpower the other flavours. Put some toast on.

Mix everything together and taste it to make sure its okay. Take it off the heat, with any luck your toast will be ready. Butter the toast and then place on a breadboard (or on a plate, no need to get fancy).

Spoon out the cheese sauce and spread it all over the bread. 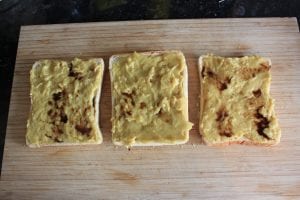 Pour some Lee & Perrins over the mixture and then put the bread under the grill on high heat until it is cooked to your liking. Pour the other half of the beer into a glass and you’ve got yourself a decent-sized meal.

One thing that I would say. This is a surprisingly rich meal, so I wouldn’t recommend it as a snack in the same way that cheese on toast can be. 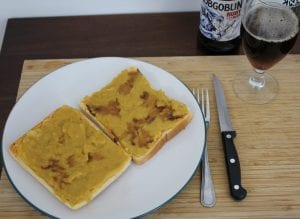 There are loads of different variations of this dish. Some are very simple, such as “Welsh Rarebit with a fried egg”. Can you guess how that one works? Some are slightly more complex, you can add in slices of tomato or tomato soup for a “Blushing Bunny”. There’s an English variation which involves soaking the bread in wine first (sounds absolutely disgusting to me). Or there’s Welsh Rarebit with slices of bacon on top, which I’m fairly sure I just made up.

Welsh Rarebit is a great pub food, though due to its complexity it is not a great drunk food! Please don’t roll in from the pub and attempt to whip up a cheese sauce. You WILL set the house on fire. If you’re having it for lunch, I’d recommend making enough for one each. Please feel free to experiment with the beer you use as well. I didn’t exactly perform an exhaustive search. Just a little bit of research and my gut instinct.

If you do find a beer that works better. Please comment below. I would absolutely love to hear what works for you. Also, provided that nobody has already invented Welsh Rarebit with bacon I feel that  I should have the honour of naming it. So far I’ve come up with “The Hog & Bunny” … which is pretty fucking terrible. So if you can think of something better then please let me know.

Are there any other variations? Any secret family recipes? Am I taking this too seriously? Probably. Good luck guys.

Previous Post Can Beer Give You Food Poisoning? Next Post Finding The Perfect Beer for Beer Batter