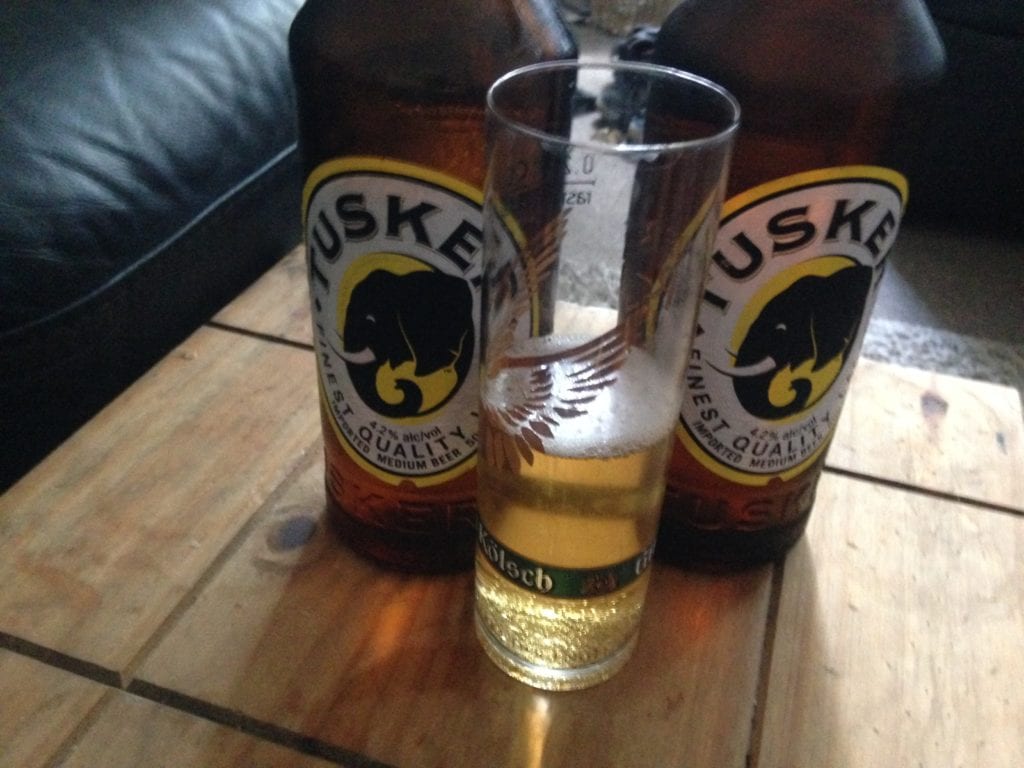 Welcome back to another episode of Beer N Biceps, this week Todd and I spent time performing a training review, a look back at what we had done so far, and how it was going. We also answered some interesting questions regarding sleep, kale, abdominal exercises, and broccoli water. We reviewed a Kenyan beer called Tusker Beer, and did our first ever bar review: Munich Cricket Club in Victoria.

So we are now 2 weeks into training, which you might think is a little too soon to be doing a training review … and we won’t argue with you! But fuck it, we’re doing one anyway. The overall goal of this training program is to create a sustainable lifestyle change. There’s no point in creating a program that you can’t follow, so we’re concentrating on easing ourselves into it, you might note that this is different to what most people do when they sign up. They go hell for leather, and have burned out by the 4 week mark. This strategy might work for many of you (going hell for leather, not the burned out part), but I know myself and I know Todd – It would not work for us.

We have managed 3 sessions in 2 weeks and we’re going for our fourth tonight (Tuesday 11th July). The session is a full body training program using high reps, based on the “Max Muscle Plan” by Brad Schoenfeld. We’ll be following it for the next few weeks, before lowering the reps slightly and increasing the weights. We have already started to adapt to the training program, and have increased the weight for almost every exercise. The only downside we’ve found is that the workout is taking way too long. We were there for nearly 2 hours in the last session, and that needs to drop for this program to be sustainable. We’re gonna try and shorten the workout tonight, which we decided as a direct result of performing a training review. Perhaps this is something that we should do more often?

The Q & A Session

After our training review we covered some questions that we’ve been getting from our listeners (thanks to every single person who has messaged us by the way). The first question we covered was the importance of sleep, something that I could talk all day about. Simply put, getting 8+ hours will help regulate appetite, increase testosterone and growth hormone levels, help you recover from exercise, and improve your mood and stress levels. If you are training hard the next day, then increasing sleep to 9-10 hours could be even more beneficial. It is for this reason that many professional sports teams have specially built sleeping rooms for their athletes.

Then we covered kale, which some see as a “super food” and others see as overrated. Personally I think that kale has a lot of benefits, it can block aromatase, it is very low calorie, and it is quite diverse as a food, it can be roasted, boiled, steamed, fried, and grilled. It’s also pretty damn cheap too! The next question concerned broccoli water, apparently people are saying that this is the latest health tonic. Like kale, broccoli is a cruciferous vegetable – meaning that it can block aromatase (keeping testosterone high, and lowering oestrogen).

So I’m sure there are some health benefits to drinking the water. BUT you’d get more benefits from eating the broccoli, and drinking the water sounds fucking disgusting! My advice would be use it as stock to make gravy, and then freeze it. Face it, we all need more gravy in our lives.

Our final question was from someone who was feeling pain in their lower back when they performed bicycle crunches, my advice was the same advice I always give in this situation – go see a physio. This is not passing the buck on my part, it’s admitting that pain is not my speciality. Physios are fully capable of assessing your issue and correcting it. A good one can usually do so within 1-2 sessions (depending on the nature of the issue obviously). The exercise itself is fine, and I personally believe that ab crunches are also perfectly safe. But if you feel pain or discomfort while performing any exercise then firstly assess your technique, and if it’s not your technique, then get yourself checked out by a professional.

We’ve not really done any bar/pub reviews as it never occurred to us to do so, but on Saturday we went to a friend’s birthday in Victoria and the venue was pretty spectacular. I love German Beer, but would usually say that the whole Oompah band, standing on tables stuff is my idea of hell on earth. But the Munich Cricket Club got it exactly right. The venue was quite small and intimate, with really friendly staff, a nice bouncer (always a huge plus), and the band itself were fantastic. 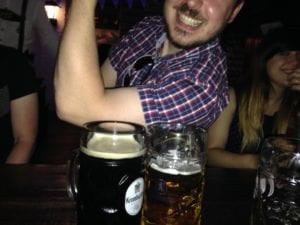 The beer selection was a little bland compared to Katzenjammers (my favourite German bar in London) and I wish they had been a little more helpful to the “I hate beer crowd”. But their cocktail selection was very impressive (though there was a 30 minute wait for them) and there were still a few beers that I didn’t get to try.

On the whole both Todd and myself really rated this little gem of a pub, and would really recommend giving it a go. It’s a little expensive, but then it’s in central London so what do you expect? Great for birthdays, great for people who love German Beer and Oompah bands playing Oasis!

This week it was Todd’s choice, and he went for one of his favourite beers Tusker. It’s a Kenyan beer and you get it a lot in Indian restaurants, due to the historic ties between Kenya and British Indians. I do enjoy Tusker, but feel that it is best suited with a curry and some hot weather. It’s one of those beers that is perfect for certain situations such as that, but can be a little underwhelming as a stand alone beer. Let’s put it this way, I’d order it with a curry and be very happy with it, but I wouldn’t order it in a pub if I saw it.

Tusker has been around since 1923 when it was founded by George and Charles Hurst. When George was killed by an elephant, Charles decided to name the company Tusker (which is a common name for a male elephant in East Africa). The beer is a pale lager at a not particularly strong 4.2%, but personally I think that the lower alcohol percentage works in its favour.

So there you have it, you’ve had a training review, a bar review, and a beer review, all in one small episode! Not bad value for money really is it? In next week’s episode we will be looking at Delayed Onset Muscle Soreness, commonly known as DOMS. We’ll look at what causes it, how it can affect you, whether it is a good or bad sign, and how to reduce the pain of it.

It’s Idi Amin kicking out the Asians from Uganda!

Yeah that’s the one! Had a quick Wikipedia check today. It was the 1968 East Africa Asian crisis that we were referring to