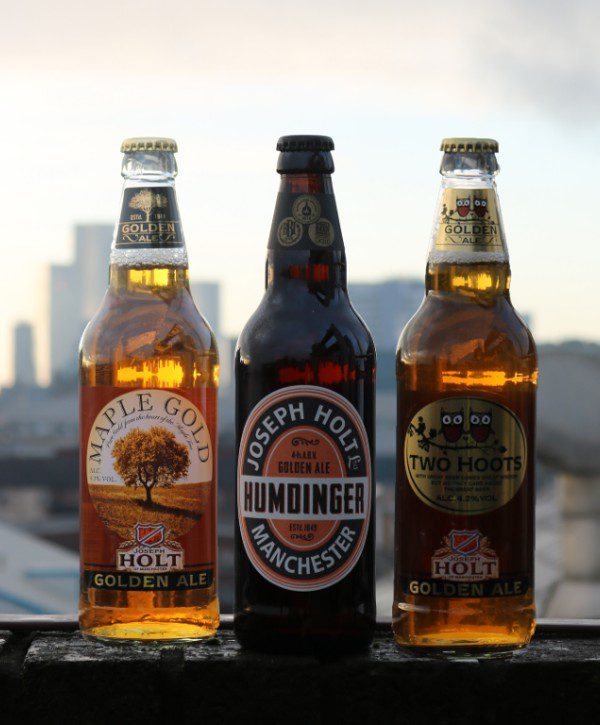 The following article is a review of Joseph Holt Golden Ales. It contains affiliate links that are clearly marked.

If I said that when I started this website the idea of getting free beer delivered to my house never crossed my mind I would be lying. But since 2015, when myself and Todd received some free beer courtesy of Tring brewery, I have had absolutely zero offers.

That all changed when I received an email from the Joseph Holt brewery asking if I would like to review some of their golden ales. I tried very hard to maintain a professional attitude while openly weeping with joy at my computer screen.

Golden ales are one of my favourite styles of English beer. If you’ve spent any time on this website or listened to my podcast, you may be aware of this already. They fill that wonderful gap in the market where English lager has completely failed to dominate.

Refreshing, amazingly drinkable, they are usually a little more progressive in their flavour profile than most traditional English beers. I absolutely adore them. 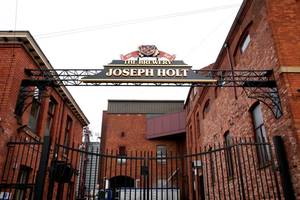 A Quick Guide to Joseph Holt

Joseph Holt is a Mancunian brewery that has been in operation since 1849, and continuously brewing in their Empire Street brewery since 1860. Manchester has a serious beer culture, with 132 breweries listed within the county of Greater Manchester.

Most people, when they think of Manchester breweries either think of Boddingtons or the Heineken brewery which is situated within the city. But in truth, Boddingtons no longer brews in Manchester having moved to Samlesbury (near Preston) in 2004. And as great as Heineken is, let’s not pretend it counts as an example of Manchester beer!

This makes Joseph Holt’s brewery a contender for the true brewery of Manchester. After trying their golden ale selection, I am quite happy to name them so.

After answering the door and fighting off my Labrador, I brought in a box with six beers, a bottle opener, and a really nice glass. I had two each of:

This is the order in which I drank them, and I spread the drinking out over three days for the purposes of scientific rigour.

One of the first beers I ever remember trying was Waggledance, a honey beer brewed by Young’s brewery. It left a huge impression on me, and I spent a lot of time trying to find beers that had strong honey tones such as that.

Humdinger golden ale reminds me quite strongly of my first Waggledance. The brewery uses Mexican honey to create a darkly sweet taste. I’m not sure why they use Mexican honey. Is it cheaper? Does Mexico have a strong honey tradition that gets overlooked due to the presence of burritos and guacamole? I don’t know.

All I can say is that I really enjoyed the taste. It’s not overly sweet, the honey reminds me of the darker kinds of honey you get in Greece which have a bit more about them than just pure sweetness.

This is a great beer, but perhaps not a session beer. It’s not strong, but it has a unique taste better suited to a sensible drink or two after work. In a pub, I’d order this first and then move on to something a little blander if I was having quite a few more.

Now, THIS is a session beer, and it was my favourite of the three. It’s absolutely everything that you want a golden ale to be. Refreshing, crisp, a slight hoppy edge, but a lack of bitterness which makes it feel almost like a lager except without the fizziness.

While Humdinger and Maple Gold are beers to impress and perhaps convert craft beer lovers, Two Hoots is for the purist. Someone who just wants a great beer brewed well.

There isn’t much else to say really. This is a beer that deserves a lot more recognition than it currently has. It also deserves a better score than Untapped provides (I sometimes think that the people who use Untapped secretly hate any beer that isn’t an ultra-rare Russian Imperial stout that you can’t actually buy anymore).

Of the three beers I was trying, I was the least excited about this one. I don’t know why but the artwork reminded me heavily of a bottle of Thatcher’s cider. Having not read anything about the beer, I expected it to be a watery golden ale with little character.

How wrong I was!

Maple Gold is a lightly carbonated golden ale that has been brewed with Canadian maple syrup. Let me tell you, if you aren’t expecting that flavour it can really shock you. I recognised the taste pretty quickly, and after double-checking, I re-examined the beer.

In my opinion, this is a slightly superior golden ale to the Humdinger. Where the honey flavours tend to dominate, the maple flavours are more subtle. This is more of a golden ale that has a nice aftertaste of maple, rather than a maple-flavoured golden ale. If that makes sense?

This really was an unexpected treat, and a great way to finish off my sampling.

Having been to Manchester a couple of times, I’m amazed that I hadn’t heard of Joseph Holt brewery before. They have a large presence in the city and a fine tradition. In my defence though, there are over 3,000 breweries in the UK!

This was a great collection of golden ales, and if you enjoy this style of beer then I think that you will really like Joseph Holt’s selection. Two Hoots in particular stands out as a proper example of English golden ales, while the other two offer an interesting take on a classic. Great for real ale lovers who really fancy something refreshing.