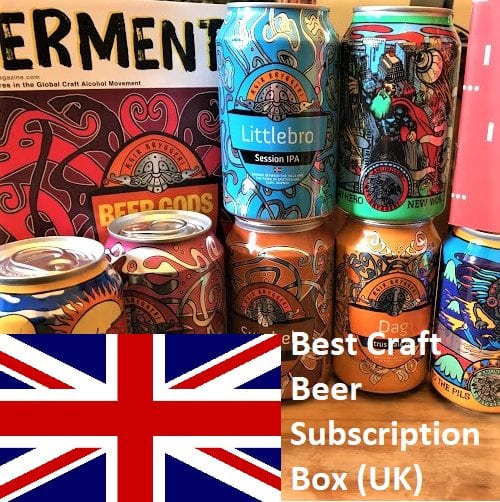 Beer subscription services are popping up all the time, and there are some really good ones out there. They are a great way to experience beers that you would never try in normal circumstances. And as someone who really doesn’t enjoy leaving the house, they are amazing for home drinking!

My personal favourite craft beer subscription service is Beer52 (check them out here) they provide an excellent selection of craft beers from all over the world, and each box comes with Ferment magazine, which is superb.

In this review, I will talk about my experiences with Beer52. What I like, what I don’t like, and why I believe that it is the best craft beer subscription service in the UK.

I first signed up to Beer52 in either 2015 or 2016. I can’t be bothered to properly check, but I was living in a 2 bedroom flat in Harrow Weald (NW London) at the time, and have vague memories of watching the Rugby world cup which was in 2015. Either way, I’ve been a Beer52 member for about 5-6 years at this time of writing.

In that time, they have only screwed up one order! Accidentally sending me the same box twice rather than a different box. That’s pretty damn good, considering I’ve moved house twice in that time, and we’ve been through a global pandemic.

Their beer selection has been superb, with only a couple of months being a letdown (their Korean craft beer month was a bit of a disappointment). I’ve experienced incredible craft beers from Poland, Italy, Estonia, Australia, New Zealand, South Africa, Ireland, and many amazing craft breweries in the UK.

They have recently begun to mix smaller craft breweries with larger, more familiar ones. Which I think was a really good movie. I’ve received several Tiny Rebel beers over the years, and they’re one of my favourite breweries.

My secret goal is to one day write for this magazine. It’s exactly what a beer magazine should be. Funny, interesting, and doesn’t take itself too seriously. The interviews with small breweries around the world are always fun. As you get a lot of insight into how different businesses found success and the unique cultures of each country.

Personally, I enjoy the humourous and nostalgic articles the most. I recently read an article in there that was talking about the joys of drinking a beer while watching the sunset. It was excellent and focused on the joys of beer drinking.

There must have been a temptation to create polarizing content, which is often the route that niche hobbies go down. Turning against “Big Beer” or rubbishing “mainstream” breweries. But I haven’t seen too much of that (though I don’t exactly read these magazines cover to cover).

When it comes to beer, there are very few styles or companies that I don’t like. I’ll drink pretty much any beer that I’m offered (my banned list is just Carling, Budweiser on draft, and Rauchsbier), and I don’t enjoy snobbery. So I’m very happy that Ferment magazine has (for the most part) avoided this.

There are two options when you start out with Beer52. You can order a mixed crate, which has light and dark beers, or you can stick to just light beers. The second option has the advantage of being vegan-friendly, and you are guaranteed a lot of IPAs and lagers.

I went with the mixed crate, and on balance I’d say that I made the right choice. Beer52 has taught me a new respect for stouts and porters. Which I would not have experienced if I’d played it safe. That said, I still prefer IPAs. And for a while, I felt like the ratio of dark to light beers was getting out of hand. My ratio preference would be 75% light, 25% dark, but about 2 years ago it was a 60/40 split in favour of dark beers.

They “fixed” the ratio about a year ago, and I have also found a new love for craft stouts and porters, so I’m really happy with the current ratio. Most of the beers are canned, but they still provide bottled beers. I find cans a lot easier to store, and I believe that they protect the beer better from UV rays and transportation issues. But some beers just feel right in a bottle (they have had a couple of La Trappe beers recently, which definitely suit bottles).

The price is very reasonable, the company has only screwed up 1 order in 5 years, the beers are well packaged, and I haven’t had a single broken bottle and only a couple of dented cans. The magazine is superb, and the sheer variety on offer is amazing. I may be wrong, but I can’t think of a single other beer subscription service that puts in the same amount of effort into sourcing and then presenting craft beers from around the world.

The price is very reasonable, and I will happily continue to stay a Beer52 member for the foreseeable future.

In the interests of fairness, I feel that I should mention some of the things that I don’t like about Beer52 so that you can have a fully informed opinion about the service. Firstly, I don’t like their cancellation policy. If you want to cancel you have to phone them up, where you will inevitably have to deal with some pressure-sales talk.

I don’t have any desire to cancel, but it’s still annoying. If I want to cancel a beer delivery service I should be able to do it with just a click of a button. My mate cancelled and said that the phone call was friendly and that they offered him a half-price box for the next month as he had several beer tokens (more on that later). This is a great policy, and they didn’t try and talk him out of cancelling. But still. Us introverts don’t like talking to strangers!

The beer tokens is another issue I have, which again is pretty minor. Every month that you are a member, you get beer tokens which you can redeem in their shop. Pretty cool right? The problem? Your beer tokens can only represent 50% of your purchase. I have £80 worth of beer tokens, but I would have to order £160 worth of beer to use them. I’d rather just be offered a member’s discount on beer.

If you are looking to expand your beer knowledge. Find brand new craft breweries from around the world. And you enjoy well-brewed stouts, porters, IPAs, sours, and any other form of beer you can think of. Then Beer52 is the best craft beer subscription service in the UK.