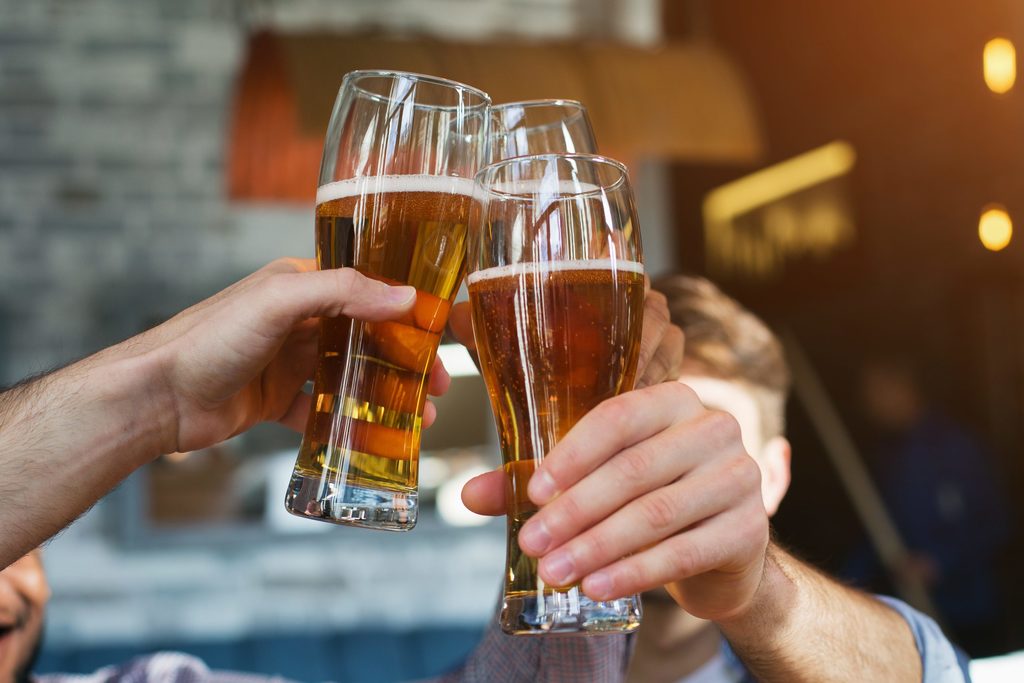 Alcohol and bodybuilding are two hobbies that a lot of men (and an increasing number of women) have. But are these two hobbies compatible? Will alcohol affect bodybuilding? Should you give up the beer if you want to succeed?

Moderate alcohol intake should have no negative effects on bodybuilding. However, bodybuilders who is training for a competition should keep alcohol to a minimum. Particularly during cuts. Alcohol can slow recovery, lead to weight gain, and prevent you from achieving optimal results in the gym.

This article will look to provide a sensible answer to what can be an emotionally-charged debate. Using science and reasoning to navigate this path. Wish me luck!

If alcohol was so detrimental to sport, then beer would be banned, and the sport of rugby would cease to exist overnight. Writing drunk is incredibly difficult to do (believe me), yet many of the greatest writers of the 20th century enjoyed a beer or two (or 50 if you include James Joyce).

Bodybuilders may not be as hard-drinking as athletes in certain sports, and they certainly can’t drink as much as writers or singers, or any other profession where body composition is important. But that does not mean that you can’t consume alcohol while bodybuilding. It just means that you have to be a lot more careful.

Would most people get better results if they gave up alcohol? Possibly, it really depends on how much alcohol they were consuming. If you are talking about 2-3 beers per week, then the difference is going to be marginal. If you’re talking about 10 a night, then, of course, it can make a difference.

Removing alcohol entirely from your diet will allow you to eat more food, rather than consuming “empty” calories from beer. You also won’t have to deal with hangovers, bad sleep, or the increased estrogen that alcohol can lead to.

But it is still possible to get amazing bodybuilding results while drinking moderately. There will be plenty of bodybuilders with physiques that you would kill for, who drink beer. If you enjoy alcohol and can drink it responsibly, then there is no need to give it up entirely.

How Serious Are You About Bodybuilding?

Bodybuilding is a pretty broad term, but often people who bodybuild are presumed to be training for Mr Olympia. I imagine that a lot of amateur bodybuilders do have these dreams in their heads when starting out. But eventually, most bodybuilders realise that becoming a professional is a step too far for them.

This is no bad thing. You can be incredibly successful in bodybuilding without ever turning out for a competition, or signing a contract with a supplement company. Most people bodybuild because they want bigger muscles and a flatter stomach.

If that is your goal, and you’re not worried about losing sponsorship, then you should be able to drink normally. A bottle of beer is usually less than 200 calories, meaning that you could easily fit it into your daily calorie intake without gaining weight!

However, if your goal is to turn pro, then you may want to consider dropping the alcohol. Remember, to become pro, you need to be better than 99.99% of gym-goers. That means that you are going to need to do things that others can’t or won’t.

Making sacrifices to your diet, your social life, and your family. That’s the reality of professional bodybuilding. It does not allow you to take your foot off the gas for even a second. You could get away with a beer every now and again, but the reality is that regular alcohol consumption is not going to work.

Bodybuilding can be split into two camps, those that use performance-enhancing drugs and those that don’t. There are professional bodybuilders who do not touch drugs, they are known as natural bodybuilders.

Why is this relevant? Well, many performance-enhancing drugs allow you a lot more leeway when it comes to alcohol and your physique. Illegal fat burners can allow you to be much less strict with your diet. If alcohol is affecting your recovery, then massive doses of testosterone can help you instead.

However, that top 0.01% of Pro bodybuilders who are in with a chance of winning Mr Olympia won’t be able to take advantage of this, because the margins are too narrow. This is even more true for professional natural bodybuilders.

Bottom Line: If you are an amateur bodybuilder who takes performance-enhancing drugs, you will be able to be less careful with your diet. This includes alcohol. Fat-burners such as clenbuterol are so effective that the extra calories from a beer or two aren’t going to matter. Steroids are so effective that they can help you avoid the recovery issues that heavy drinking can cause.

“In general, acute alcohol consumption, at the levels often consumed by athletes, may negatively alter normal immunoendocrine function, blood flow and protein synthesis so that recovery from skeletal muscle injury may be impaired” (Barnes 2014)

Of course, the above quote refers to acute alcohol consumption (i.e. a lot). But you get the idea. Anecdotally, many people have probably noticed that they feel a lot worse the next morning when they’ve combined exercise and alcohol.

Personally, I remember going to a house party after completing a 10k race. Let’s just say I redecorated the carpet before leaving! Alcohol can dehydrate you, and exercise often leaves you in a dehydrated state. Rehydrating with beer is a terrible idea. 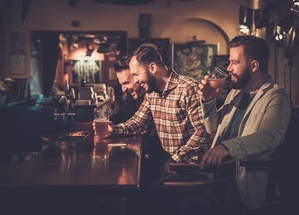 Drinking on your rest days is a good way to mitigate the issue. Drinking a lot of water before switching to alcohol can also help (or an isotonic drink).

Bottom Line: Alcohol can slow recovery from exercise, combining exercise and alcohol can also leave you dehydrated. So remember to rehydrate before entering the pub. 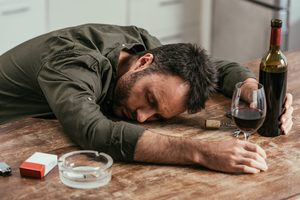 Sleep is an essential part of recovery, so technically I could have included this in the last part. But sleep is also important for your health. While alcohol can make you feel sleepy, it is actually terrible for sleep quality. As this NHS article states:

“Drinking higher doses of alcohol was found to reduce the amount of REM sleep, and resulted in a shallower sleep during the latter half of the night. It also appeared to adversely affect the part of the brain that usually controls the body during sleep.” (NHS 2011)

Good sleep has so many health benefits, while bad sleep can ruin your day and wreck your health long-term. Bad sleep can lead to lower testosterone levels, weight gain, bad mood, fatigue, and an inability to concentrate properly.

Again, this is more about heavy drinking, rather than the occasional cold beer after work. But if you’ve ever tried to workout after a bad night’s sleep, you’ll know why avoiding drinking sessions in the pub could help your bodybuilding career.

While alcohol is lower in calories than most people assume, it is still a source of unnecessary calories. Unlike most food and drink, you can’t use the calories for exercise. That’s not to say that drinking beer or wine is unhealthy. In my article on the health benefits of beer, I concluded that on balance, beer and wine can make up part of a healthy diet.

It is also possible to lose weight while drinking beer, provided the rest of your diet is on point. When it comes to weight loss, all that matters is calories in vs calories out. If you are consuming fewer calories than you are burning, then you will lose weight over time.

Following a bodybuilding workout program will mean that you are burning a LOT of calories. It also means that your metabolism will be higher than normal as muscle requires more energy to maintain. If you think about it, an amateur bodybuilder would be able to get away with drinking more beer than a regular person, as their daily calorie allowance is so much higher.

Bottom Line: It is possible to drink beer (or any alcohol) while dieting, but as your calorie targets go down (cutting) this task will become harder and harder.

Most bodybuilders follow a bulk and cut diet regime. During a bulk, they will create a calorie surplus, consuming more calories than they burn. This allows them to build muscle, train at a higher intensity. It is during a bulk that bodybuilders gain most of the muscle mass.

Many bodybuilders think of bulking as an excuse to eat what they want, confident that they can burn off any excess body fat during the cut. Increasingly, bodybuilders are avoiding the “dirty bulk”, as they realise that the less disciplined the bulk, the harder the cut.

Even so, if there was ever going to be a time when drinking beer was okay it would be during a bulk. You still can’t really expect to get away with drinking 5-6 beers a night, but having a few a week while bulking is probably going to be okay.

I’ve written articles and recorded podcasts on the subject of losing weight while dieting. However, there is a bit of a difference between my idea of dieting (slow reduction in calories over time) and cutting.

When bodybuilders cut they usually spend a lot of time in a large calorie deficit, which gets progressively larger week on week. By the end of a cut, many bodybuilders will be on very few calories at all. As such, drinking beer would be ridiculous! A bodybuilder may be able to get away with a few beers at the beginning of a cut but towards the end? No chance whatsoever.

Best Beers to Drink While Bodybuilding

I’ve talked about low-calorie beers before, and which beers you can drink on a diet. The conclusion that I came to is that there isn’t much difference between low-calorie beers and regular beers. Switching from pint to bottle is a better way to save calories than switching from a stunning pilsner to a pretty bland Coors light.

But if you really want a beer that is low in calories, I’d recommend Bud Light. It’s fairly bland, and not as fun as a bottle of Stella Artois, but as light beers go it’s pretty decent.

A Quick Guide to Drinking While Bodybuilding

The trick with drinking beer with dieting is to focus on your drinking habits rather than the beer itself.

Another thing you should focus on is getting your calorie targets worked out, that way you’ll know how many beers you can fit into your diet while still staying on target. While I personally don’t recommend getting involved with steroids or illegal fat-burners, it must be said that they will allow you to be a little more blasé about the calories in beer etc…

Yes, alcohol makes bodybuilding more difficult. But you certainly don’t need to give up beer to become successful. You just need to be sensible. High calorie junk food is just as likely to sidetrack bodybuilding progress, but how often have you seen a bodybuilder eat a cheeseburger?

Arnold Schwarzenneger is perhaps the most famous bodybuilder of all time, he drank beer a lot, and brandy. A quote attributed to Arnie goes:

“Milk is for babies, when you grow up you have to drink beer”

I think that answers the question better than anything I’ve written so far! Will alcohol affect bodybuilding? Yes, but that’s no reason not to drink it.