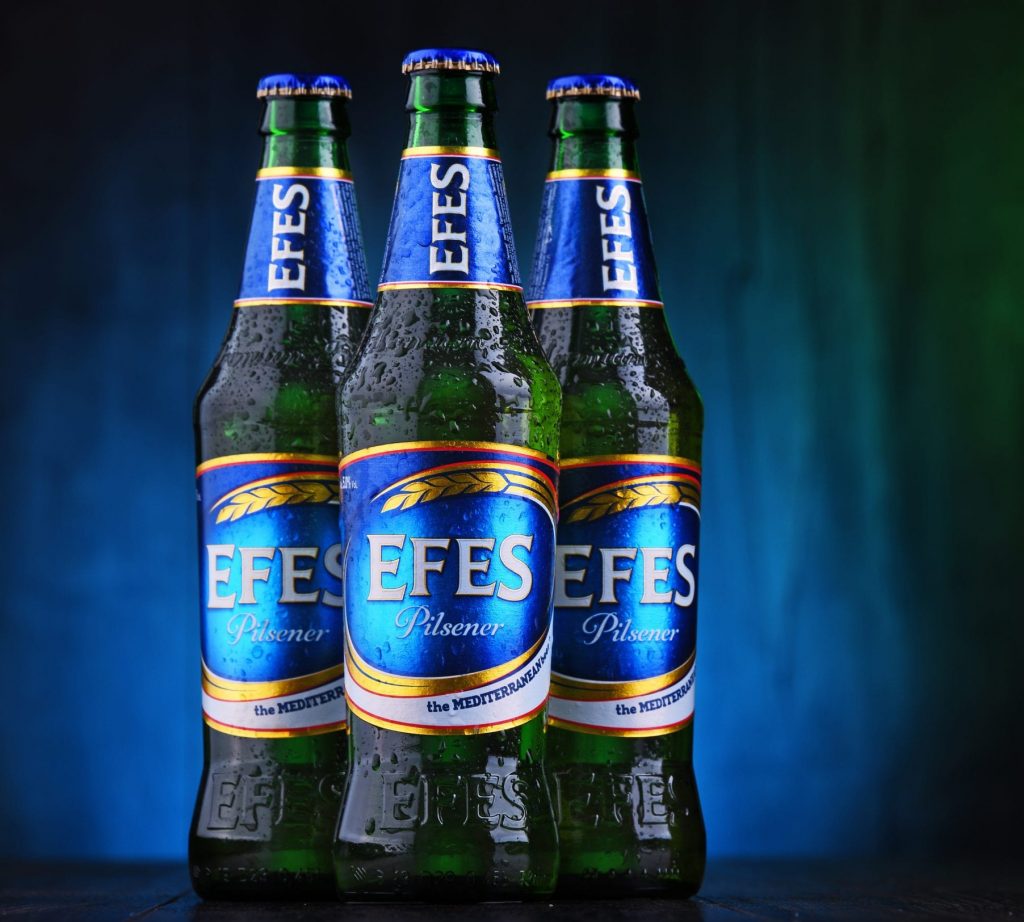 Efes Fact File: Everything You Wanted to Know

Efes is by far the most popular beer in Turkey and is gaining in popularity in the UK. But how many calories are there in a pint of Efes? How strong is it? Is Efes gluten-free? Or vegan? What beer is similar to Efes? Let’s find out.

There are an estimated 241 calories in a pint of Efes. It is 5% abv. As it is brewed with malted barley it cannot be gluten-free, however, it will have less gluten than most beers as it uses rice as well as barley. Efes does not use isinglass finings so can be considered vegan.

In this article, I will be taking a closer look at the questions raised above. I will also talk about beers that are similar to Efes, in case you fancy something different.

How Many Calories Are There in a Pint of Efes?

Thanks to Turkey’s ban on beer marketing, Efes does not have a proper website. Meaning that finding the calories in a pint of Efes is challenging to say the least. So I have had to estimate it using a beer calorie calculator. While the calculator does have a 5% margin for error, it is good at giving a decent estimate of the calories. So my calculations are based on that.

According to the calculator, there are 42.42 calories per 100ml.

How Much Alcohol is There in a Pint of Efes?

Efes is 5% abv, whether you get it from a bottle, can, or from draught. This is not always the case with beer, sometimes there is a big difference between the bottled and draught versions.

Yes. Because Efes does not require isinglass finings (or similar products) to clarify and filter the beer, it can be considered vegan. Check out my article on veganism and beer to learn more about isinglass.

What Beer is Similar to Efes?

In my article on Turkish beer, I pointed out that Efes has pretty much cornered the market when it comes to beer. Thanks to Turkey’s banning of any form of beer advertising it is almost impossible to talk about similar Turkish beers. So I’ll have to recommend beers from other countries.

Keo from Cyprus feels like a good shout, it is brewed from a neighbouring country and is also based off German pilsners. You’ve also got Leon. Mythos is a Greek beer with a similar background.

Other than that, there are German pilsners, Czech pilsners, and similar large brewery beers such as Heineken, San Miguel, Stellar Artois, Corona, and Asahi. It’s not that I think Efes is a bad beer, I enjoy it. But it is nothing special. It does nothing to distinguish itself from the beers I just mentioned.

There are better pilsners out there (the Czech and German pilsners for example), and I can’t say that I like the way that Efes has created a monopoly of the beer market in Turkey. If you’re in Turkey or in a Turkish restaurant, then Efes is a great choice. But it’s not a beer that I would grab in the supermarket (unless it was on offer).