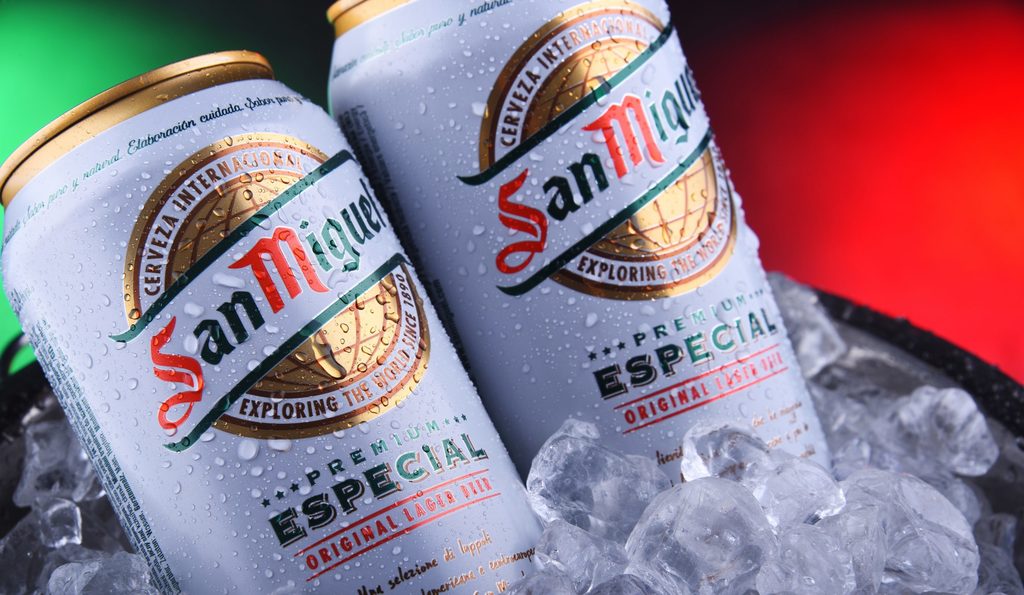 San Miguel Fact File: Everything You Wanted to Know

San Miguel contains 256 calories in a pint and it is 5% abv. Regular San Miguel is not gluten-free, but they do sell a gluten-free version of their beer. San Miguel beer is vegan friendly, and there are many alternatives to San Miguel, which is a standard lager.

Hopefully, this will be your one-stop-shop for any San Miguel-related questions you may have.

How Many Calories in San Miguel?

There are many different volumes of San Miguel that are sold. You’ve got pint, can, bottle. Plus, there are differently sized cans and bottles. From what I can tell, the calories per 100g are the same for bottles and cans. In the absence of evidence, I will use that equation.

As you can see, the gluten-free version of San Miguel has more calories per 100g than regular San Miguel.

How Much Alcohol is there in a Pint of San Miguel?

San Miguel is 5% abv when in a bottle, can, or on draught. Interestingly, the Gluten-Free San Miguel is slightly higher at 5.4% abv. Recently, they have brought out an alcohol-free version.

Regular San Miguel is not gluten-free. The company does, however, sell a gluten-free version of their beer. It is slightly higher in calorie, and in alcohol (5.4% rather than 5%).

As you can probably imagine, I did not do much research into this one. If there is a gluten-free version of a beer, then it stands to reason that the original is NOT gluten-free. Unless of course, it is all one large scam. Tinfoil hats at the ready guys.

What Beer is Similar to San Miguel?

San Miguel is a German-style pale lager or pilsner. This beer style is incredibly common, particularly in Spanish and Portuguese speaking countries. Other Spanish beers that are similar include:

Then you have also got beers such as Corona from Mexico, Sagres or Super Bock in Portugal, Efes from Turkey, or any number of German, Polish, or Czech pale lagers. Basically, if you love San Miguel, then there are literally thousands of similar beers that you will also enjoy.

Is San Miguel Spanish or Filipino?

As an Englishman, I hear the name “San Miguel” and I immediately think of Spanish lager. But apparently there are two San Miguels out there. One in Spain, and one in the Philippines.

The original San Miguel Brewery was set up in the Philippines in 1890 by a group of Spaniards. It was/is very successful, and expanded throughout the Philippines and neighbouring countries. Eventually, it went full circle and opened a brewery in Spain.

In 2000, the Spanish San Miguel was bought by Mahou, another Spanish brewery. Both breweries sell their own San Miguel beer, and both work happily side by side. But there is no connection between the two anymore.

Both the Filipino beer and the Spanish beer are pilsner-style lagers though, so would taste quite similar!

I like San Miguel, I always have. The unique glass that you are supposed to drink it from is fairly fun, and the beer does exactly what it is supposed to. It is a refreshing, mild-tasting pale lager. Perfect for drinking outside on a summer’s day, or while watching the football.

A lot of real ale and craft beer fans like to hate on lagers such as this, but they are absolutely fine. I couldn’t drink it every day, I’d get bored. But place a pint of it in front of me and I’ll be very happy indeed.

There are a lot of excellent craft beers coming out of Spain right now though, which may be worth a try instead. I also think that Cruzcampo is a great alternative if you want to spend less for essentially the same beer! Little Spanish tip for you there.

Previous Post Beer in England: The Complete Guide Next Post Budweiser Fact File: Everything You Wanted to Know