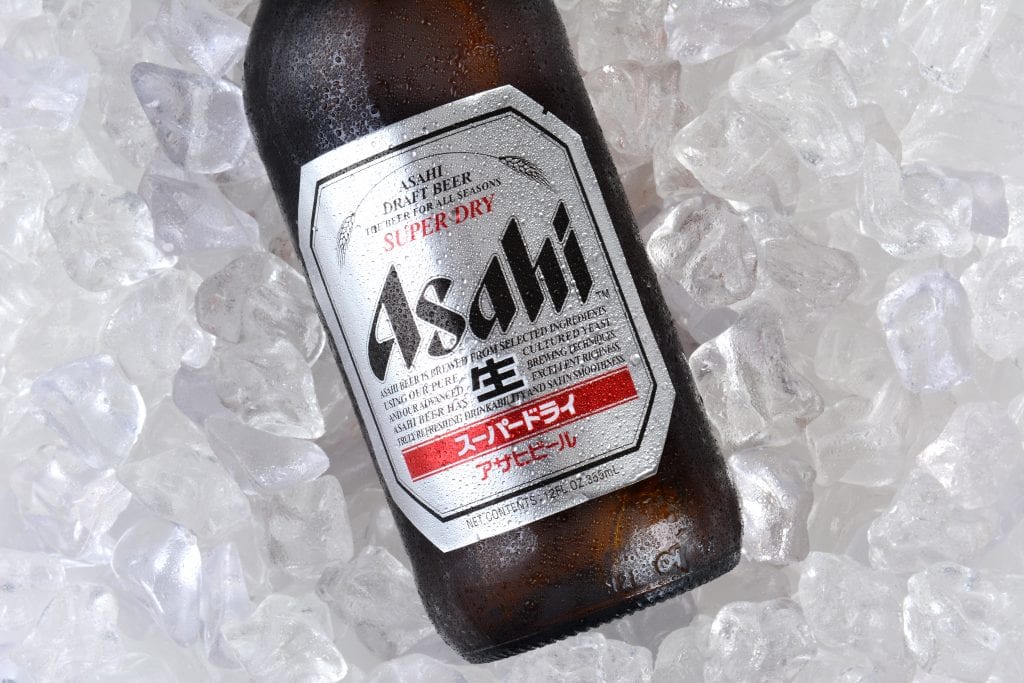 Asahi Super Dry: Everything You Wanted to Know

I’ve written about Asahi before in my article on beer in Japan. It is one of the biggest brewing corporations in the world. But how many calories are there in Asahi? How strong is it? Is Asahi gluten-free? Or vegan? What beer is similar to Asahi? Let’s find out.

There are 233 calories in a pint of Asahi (568ml). It is 5.2% abv. Asahi contains barley, so it cannot be gluten-free. However, due to avoiding all use of animal products in the brewing process, Asahi is vegan-friendly.

In this article, I will take a closer look at all of the questions outlined above. I will also list some of the beers that are (in my opinion) similar to Asahi Super Dry.

How Many Calories Are There in Asahi?

Say what you like about Asahi as a brewery (and many people say some pretty grim stuff) but they provide their nutritional information in an easy to find manner. That’s all I ask from a brewery website! There are 41 calories per 100ml of Asahi. I am using this information to find the calorie contents of the different serving sizes.

How Much Alcohol is There in Asahi?

Asahi Super Dry is 5.2% abv, which is fairly standard for a pilsner. Asahi now offers a non-alcohol version of Super Dry which apparently compares favourably with other non-alcoholic beers. I will have to give it a try sometime.

Like most beers, Asahi is brewed with malted barley which is a source of gluten. Asahi do not appear to offer a gluten-free version of their beer so far. But with many large breweries putting effort into this, it can’t be long before they try.

Yes, Asahi Super Dry does not use any animal products in the brewing process, so can be described as vegan. Many beers (particularly English Ales) are brewed with isinglass finings, which come from fish swim bladders. To learn more about vegan beers and isinglass, check out my article on the subject.

What Beer is Similar to Asahi?

Asahi Super Dry is a pilsner beer. It was designed to be very similar to North German pilsners, and as a result of its popularity, the whole Japanese beer scene tried to emulate it. This means that there are several beers that are similar to Asahi. Both Japanese and German.

Some Japanese pilsners that are similar to Asahi Super Dry: Sapporo, Kirin Ichiban, and Premium Yebisu.

You’ve also got beers from neighbouring countries such as Tsingtao from China, Tiger Beer from Singapore, and Chang beer from Thailand.

But what about those German beers that Asahi was attempting to emulate? Well, you’ve got Veltins, Flensburger, Bitburger, Beck’s, Warsteiner, Holstein Pils, and Rothaus to name just a few. Check out my article on German Beers to find even more worthy candidates.

You may also want to take a look at Czech beers such as Staropramen, Budvar, Pilsner Urquell, Kozel, and Pravha.

Personally, I’ve never been too fussed about Asahi Super Dry. It’s fine, but it isn’t my favourite Japanese beer (that would be Kirin Ichiban). If you like Asahi, then a German pilsner such as Veltins should hopefully blow your mind!