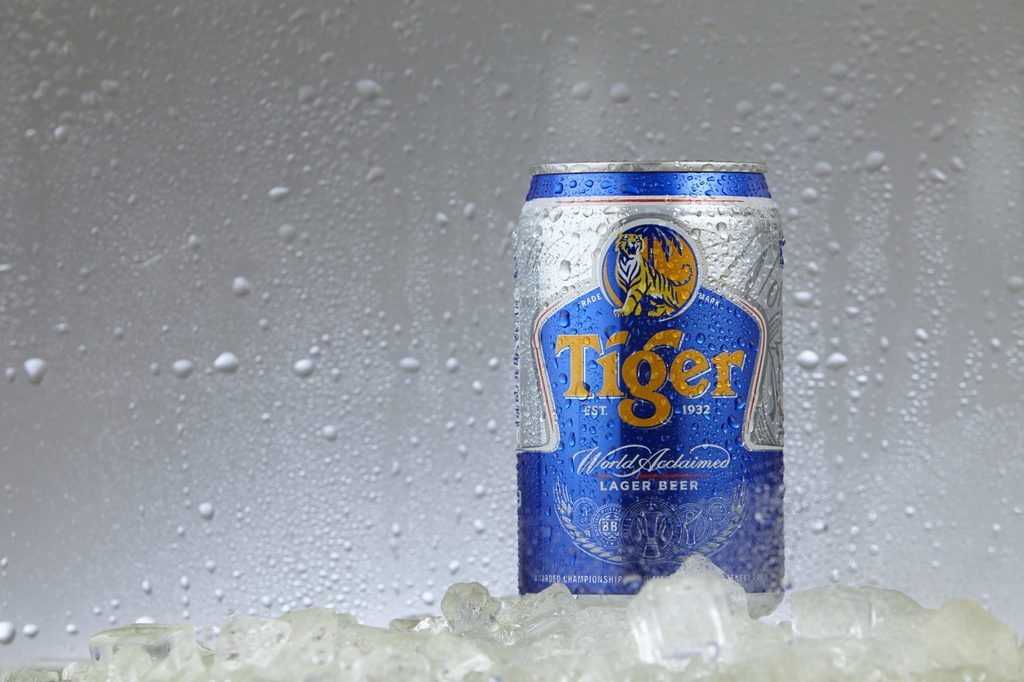 Tiger Beer Fact File: Everything You Wanted to Know

Tiger beer is well-loved in the UK. It is synonymous with Chinese restaurants, despite the fact that it is actually a Singaporean beer. But how many calories are there in tiger beer? What is the alcohol percentage? Is Tiger beer gluten-free? Or vegan? What beer is similar to Tiger beer? Let’s find out.

There are 139 calories in a 330ml bottle of Tiger beer. It is 5% abv globally, but just 4.7% abv in the UK. Tiger beer is not gluten-free as it uses malted barley. However, it does contain surprisingly low levels compared to many beers. Tiger beer is vegan.

In this article, I will attempt to more thoroughly answer the questions raised above. I will also look at beers that are similar in taste and style to Tiger beer. In case you fancy something a little bit different.

How Many Calories Are There in Tiger Beer?

According to the Tiger beer website, there are 42 calories per 100ml contained within each beer. There does not appear to be any difference between draught, canned, or bottled beer in terms of calories. However, due to the domestic Tiger beer having a slightly higher abv (5%) the calories may differ slightly for non-UK Tiger beer.

I have never had a Tiger beer poured from draught in the UK, however, I do believe that there are a few places where you can so I added the calories just in case.

How Much Alcohol is There in Tiger Beer?

There is 4.7% alcohol in Tiger beer in the UK, but if you were to buy Tiger beer in Singapore (or most other countries) it would be 5%. Sadly, this seems to be a common occurrence with beer that is brewed in the UK on behalf of international companies. We’ve seen this with Fosters and Sol.

I suspect that the reason for this is to avoid paying more tax as the UK taxes based on alcohol percentage. Carling, for example, revealed that they lowered their beer to 3.7% for this reason (and just forgot to tell everyone).

Tiger beer is not gluten-free, this is because it is brewed with malted barley which contains gluten. However, the gluten levels are supposedly very low. This may be helpful to some of you, but if you can’t stand any gluten then Tiger beer is not the beer for you.

Yes, Tiger beer does not use any animal products in the brewing process. Many beers use collagen (often isinglass) to clarify their beers, but the larger breweries who focus on pilsners don’t need to use it so are often vegan friendly. Check out my articles on vegan beer and unfined beer if you are interested in learning more about this.

What Beer is Similar to Tiger Beer?

Tiger beer is a very typical pale lager that is brewed in Asia. If you like that, then there are a number of similar beers from Japan, China, and Thailand that you will also enjoy. I’ve written about beer in Japan before, which you can check out for a list of amazing Japanese beers.

But off the top of my head, you’ve got Asahi, Kirin Ichiban (my favourite Japanese lager), and Sapporo. China sells Tsingtao, Snow Beer, and Zhujiang Beer. Then there is Chang, Singha, and Phuket beer from Thailand, and San Miguel (no, not the Spanish one) from the Philippines.

You have also got Indian beers such as Cobra, Mongoose, Kingfisher, and Bira91 (which I tried during the 2019 Cricket World Cup) and Nepalese beers such as Gorkha and Everest.

Of course, you don’t have to stick with Asian beers, they are all based around the pilsners of the Czech Republic and Germany. These are better (in my opinion), partly because they are the original, and partly because of how they are brewed.

Pilsner Urquell, Budvar, Staropramen, Pravha, and Kozel are all stunning examples of Czech pilsners, while Flensburger, Bitburger, Warsteiner, Jever, and Veltins are excellent examples of German pilsner. Check out my article on German beers to learn more.