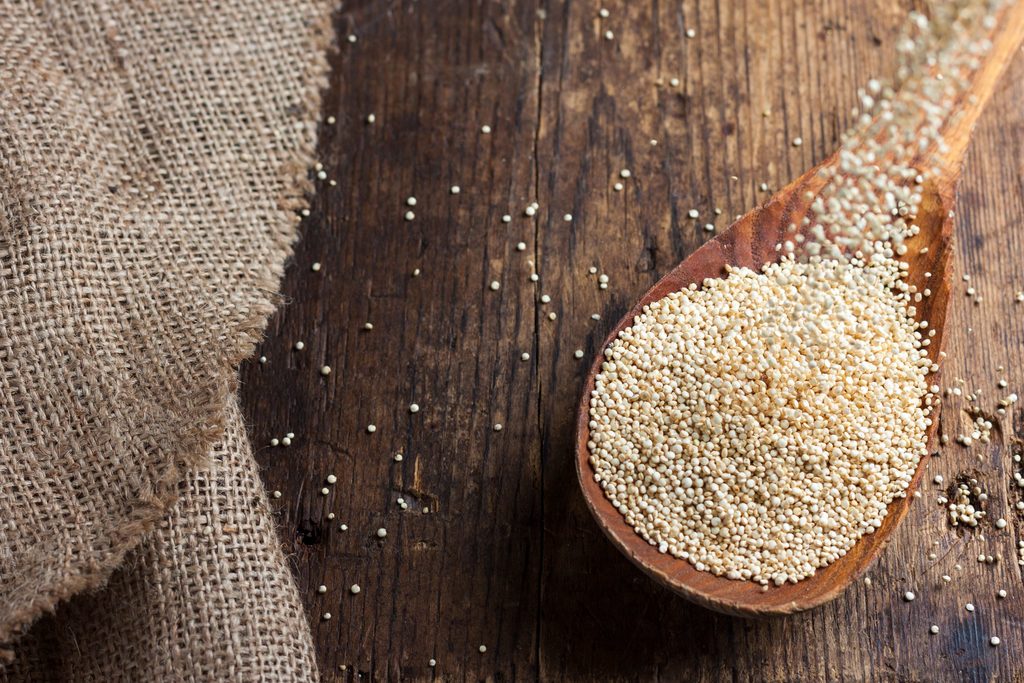 Is Quinoa Good for Bodybuilding?

Quinoa has been described as a superfood by many websites and books and is often considered an excellent health food to add to your diet. But is quinoa good for bodybuilding? I decided to find out.

Quinoa is a good source of protein, fibre, and iron, which are all useful for bodybuilders. But it isn’t going to give you an edge over non-quinoa eaters. If you enjoy the taste and need to increase your fibre intake then quinoa can be beneficial, but quinoa is nothing special bodybuilding-wise.

In this article, we will look at several reasons why quinoa may be a good food to add to your diet, and we’ll also look at a couple of reasons why you might not want to bother with it.

Is Quinoa Good for Bodybuilding?

One thing you should know right away, the term “superfood” is a made-up media buzzword. It is not a scientific term. I could call bacon a superfood without any legal repercussions. This does not mean that the foods that are labelled as “superfoods” are unhealthy, just that the term is fairly arbitrary.

The problem is that once a food has been called a superfood, lots of people start looking for benefits. This can lead to confirmation bias. You are looking to prove yourself right, rather than looking with an open mind.

Because of this, foods like quinoa can end up with an inflated reputation. A standard sized serving of quinoa contains 8 grams of protein. This isn’t that much, not compared to a chicken breast or a whey protein shake. But many fitness and nutrition articles will claim that it is “high in protein”. It’s high in protein compared to rice (2 grams), but not compared to other foods.

Another commonly cited benefit is that quinoa is high in iron, which if you’ve read my article on iron and bodybuilding you will know can be important. According to Medical News Today, a cup of cooked quinoa contains 34.5% of a man’s daily recommended intake of iron and 15% of a woman’s.

That’s pretty decent, but iron is not hard to consume enough of. Most bodybuilders will get more than enough iron in their diet without any quinoa whatsoever. If you are struggling in this regard, then swapping rice or pasta for quinoa could be a good idea.

The bottom line is that quinoa is a highly nutritious food but not some secret game-changing bodybuilding food. Add it to the occasional meal and focus more on having a varied diet with lots of fruit and vegetables.

Is Quinoa Good After a Workout?

Again, there is nothing particularly wrong with having some quinoa after a workout, but there aren’t any real benefits either. Most fitness experts recommend consuming carbohydrates after a workout. But these are ones that are high in sugar so that they can replace glycogen and spike insulin. Quinoa isn’t going to do that.

Another common piece of advice is to consume a high protein meal. While quinoa has 8 grams of protein, this isn’t anywhere near as good as a whey protein shake (20-25 grams). If you wanted to make a post-workout meal such as quinoa, chicken, and some vegetables then that would be perfect. But most people just want something quick!

If you’ve ever come home after a tough workout and thought “I really fancy some quinoa” then have at it. But personally, I prefer a bowl of cereal.

Is Quinoa Good for Cutting in Bodybuilding?

Yes. It is low in calories, moderately high in protein, and is an excellent source of fibre. This means that you will feel less hungry between meals because both protein and fibre are highly satiating. It’s also nutrient-dense, meaning that there are a lot of vitamins and minerals in it.

This is good during a cut because you are eating less food than usual, so you are at a higher risk of being deficient in something. Ensuring that the foods that you do eat are good sources of nutrients is an excellent strategy for a cut.

While I’ve spent time pointing out that quinoa is a little overrated by many health bloggers, I’ll happily recommend it to anyone who is looking to cut calories for bodybuilding. It’s a solid choice and can be quite versatile. Always a plus when cutting.

Is Quinoa Good for Muscle Building?

As a food, it only contains 8 grams of protein per serving, so quinoa isn’t amazing when it comes to muscle building. But it is decent enough. If you are looking to build muscle, then swapping a low-protein grain such as rice for quinoa may be beneficial. It’s not that important though.

I like quinoa, it’s a decent enough food with quite a few minor health benefits. So don’t misinterpret this article as in any way anti-quinoa. But I do get fed up with the deification of some foods that many fitness bloggers and websites are responsible for.

If you like quinoa then eat it. It’s an excellent source of fibre, has a good amount of protein, and is a source of iron. All good. If you hate quinoa then you can easily avoid it for the rest of your life without any negative effects on your health. There are many ways to get fibre, protein, iron, and any number of vitamins and minerals into your diet. That is what is so wonderful about food. There is a huge variety.

What quinoa won’t do though, is give you some sort of advantage over other bodybuilders. That’s just not how food works. Concentrate on hitting your protein targets, exercising consistently, and getting enough rest time to fully recover. Sleeping 8 hours a night will do more for you than 5000 servings of quinoa!

If you liked this article, then check out my article on bodybuilding in your 40s. It gives a fascinating insight into the unique issues that face us as we age, and how we can get around them.