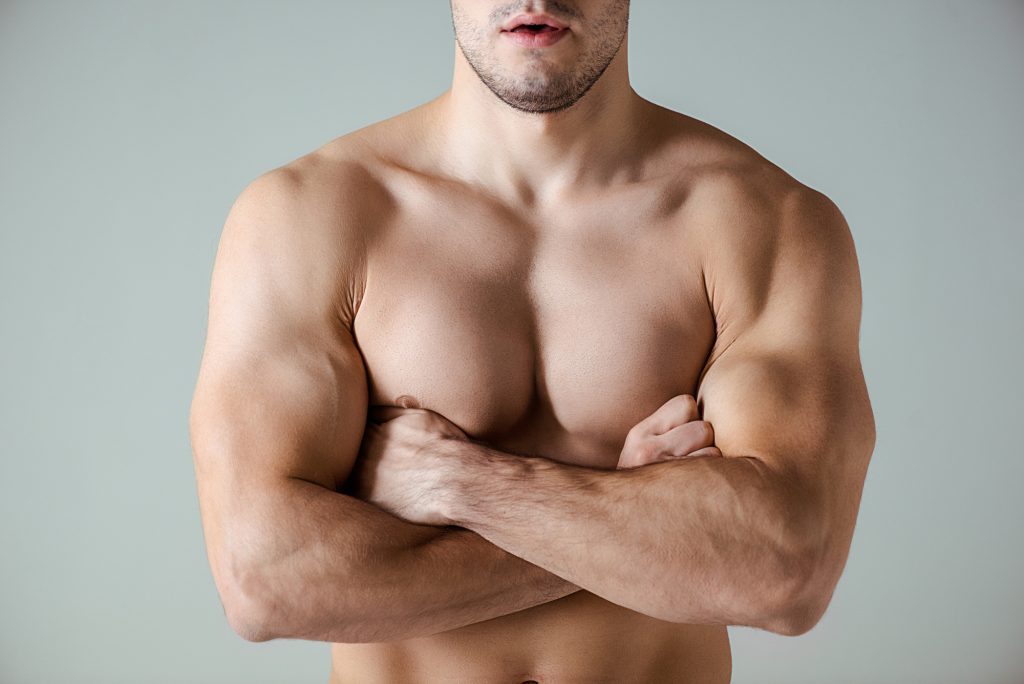 Do Bodybuilders Inject Oil? Everything You Need to Know

Ten years ago, if you had told me that there would be people injecting oil directly into their muscles I would have believed I was talking to a crazy person. It sounds horrific. But it is becoming increasingly popular. We’ve all seen the crazy photos of amateurs going overboard, but do bodybuilders inject oil? And if so, why?

In this article, we will be taking a closer look at why bodybuilders inject oil, and whether the ends justify the means.

There are many bodybuilders who inject oil (often called site enhancement oil or SEO) into certain muscles in an effort to create symmetry or to make hard-to-grow muscles look fuller. Whether Pro bodybuilders are injecting oil regularly is a matter of debate. There is no real evidence either way, but it is certainly plausible.

Many amateur bodybuilders are definitely using Synthol, as there are hundreds of “bodybuilders” who became famous for their ridiculously shaped oil-filled muscles. There are three reasons why many amateurs who use Synthol end up with such ridiculous looking muscles:

I think it is sensible to draw a distinction between bodybuilders who inject oil to enhance their physiques and people who abuse synthol to create ridiculously unnatural “muscles”. This article is focusing on the former.

Why do Bodybuilders Inject Oil?

The world of professional bodybuilding is about achieving perfect muscular size and symmetry. Site enhancement oil (Synthol or other oils) can help to achieve this goal. But only when applied expertly. Go too far and you end up looking comical.

It is important to note that what bodybuilders are aiming to achieve is not a natural look. Bodybuilders haven’t looked natural in decades. That ship sailed in the late 70s and early 80s. Put Phil Heath in a room with non-bodybuilders and he will look like a different species of human.

This doesn’t appear to be an issue, bodybuilders are happy with how they look on stage, as are bodybuilding fans. There may be a few people (like me) who wish that bodybuilding would return to the physiques of the 70s, but for the most part, massive mass monsters are here to stay.

The reason why bodybuilders inject oil is that it can be incredibly effective at improving the aesthetics of their muscles. Got a left bicep that is slightly smaller than your right? You can either fix this with a brutal training regime, or you can inject oil into the bicep and increase its size.

I should note that the use of Synthol is sparing, unlike those unfortunate Synthol addicts, bodybuilders will ration their use. This is the powdered sugar on top of the cherry on top of the cake. If you will forgive an incredibly stretched idiom.

Bodybuilders have a different relationship with the risk/reward ratio than the general public. This is why so many bodybuilders die at a young age, check out my article on bodybuilder health risks to learn more.

According to this Journal article, Synthol is comprised of:

Synthol has been around for a very long time and is often used in cosmetic surgery. Synthol is usually referred to as an oil, due to it being 85% oil, but it is actually a mixture of oil, painkiller, and alcohol.

Yes, injecting oil into your muscles is bad. For a number of reasons. Firstly, it is cheating. I know that Pro bodybuilders have an elastic understanding of what following the rules of bodybuilding competitions requires, but this feels like a step too far. Imagine losing a competition because your competitor has artificially pumped their muscles up with oil.

This feels like a different form of cheating than the usual stuff. With regular cheating, it allows bodybuilders to work harder, put in more effort, and take their bodies further than anyone else can. With Synthol, it’s removing the effort, and that is something completely different.

But even if we ignore the moral argument, injecting Synthol into your muscles is highly dangerous, and comes with a number of side effects.

Side Effects of Synthol

“Widely available on the Internet, it is reported to carry a wide range of health risks and side effects such as localised skin problems, nerve damage and oil filled cysts, as well as muscle damage and the development of scar tissue”

There are a number of studies from the early 00s that discuss case files of male bodybuilders who have had to go to the hospital after using Synthol in their arms or chests. Usually, the bodybuilders are suffering from cysts filled with oil.

“Ultrasound imaging showed multiple, low reflecting round nodular areas of up to 1 cm diameter in both breasts. Excision of a representative nodule revealed a cyst filled with oily material, surrounded by granulomatous tissue.”

I don’t say this often in life, but suffering from oil-filled cysts would be a dream come true compared to other health complications that bodybuilders have experienced:

Removing pus-filled cystic scar tissue clearly had an effect on the surgeon and the scientists writing this journal. Finishing their conclusion by saying that they hope that the mutilation will put other bodybuilders off in the future. This has not been the case.

Bodybuilders Who Use Synthol

If you are using Synthol correctly, then it is impossible to tell whether you are using it or not. Because of this, there are no bodybuilders that I can say with 100% certainty have or have not used Synthol. Go on bodybuilding forums (or Reddit) and you will find post after post claiming that all Pro bodybuilders use Synthol. Often it is claimed that they use it for their rear delts.

In the past, Flex Wheeler, Lee Priest, and Rich Piana have all been accused of using Synthol, but all three have denied doing so. There are a couple of YouTube videos where Lee Priestly “admits” using it, but he’s clearly joking.

For all we know, every Pro bodybuilder is using them, but until you see a bodybuilder administering oil with your own eyes, it’s best not to spread rumours. Particularly if you are making those claims online.

If you are going to use Synthol, then remember that less is more. As we found out at the beginning of this article, if you are doing Synthol properly, it should be impossible for anyone else to know for sure.

You need to be doing the hard work in the gym, and following the right diet. Your sleep needs to be optimised, as does your recovery strategy. Every aspect of your training needs to be on point before you even consider Synthol.

But, seriously, please do NOT consider Synthol.

The use of Synthol should be repellant to anyone who loves bodybuilding. As fans, we have become used to making excuses for the constant cheating and law-breaking that makes Professional bodybuilding what it is.

Synthol is unjustifiable in my opinion. It is a step too far. Not only does it tarnish the reputation of Pro bodybuilding, but it is also incredibly dangerous for the user. With short and long term side effects associated with its use.

I am fairly certain that there are Pro bodybuilders out there who use Synthol regularly. It’s easy to get hold of, legal to do so, and it can solve frustrating issues instantly. But Synthol goes against the spirit of competition, and it really isn’t worth the trouble that it can cause.