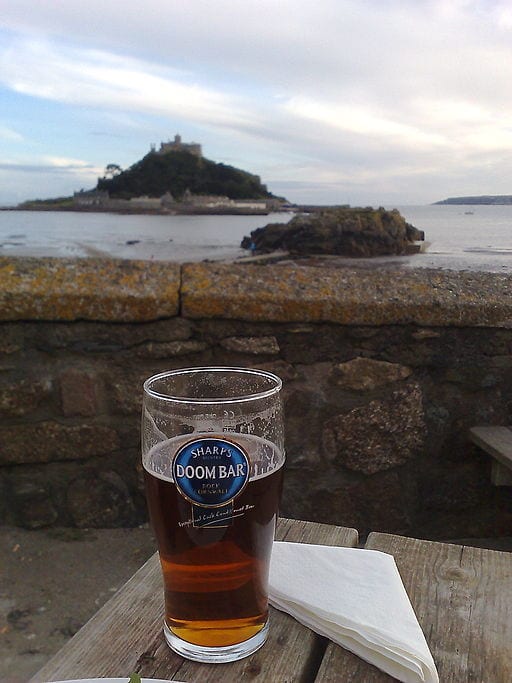 Doom Bar Beer: Everything You Wanted to Know

Doom Bar Beer by Sharp’s is the number one selling cask ale in the UK. Its rise has been meteoric. You can find it everywhere! But how many calories are there in a pint of Doom Bar? What is the alcohol content? Is it gluten-free? Is it vegan? What beer is similar to Doom Bar? Let’s find out.

There are 205 calories in a pint of Sharp’s Doom Bar (568ml). A bottle of Doom Bar has 4.3% abv while a pint of cask ale has only 4% alcohol. Doom Bar is not gluten-free as it contains malted barley. Doom Bar is also not vegan as it uses isinglass to clarify the beer.

In this article, I will take a closer look at each of the questions outlined above, and talk about beers that are similar to Doom Bar.

How Many Calories Are There in a Pint of Doom Bar?

There are 36 calories in every 100ml in Sharp’s Doom Bar, this is low compared to most lagers, but about right for an ale. I got this information from the back of the bottle, but could not find the information on the Sharp’s website (which is annoying).

Doom Bar only appears to be sold in either a 500ml bottle or as a pint. Which makes this job a lot easier for me!

How Much Alcohol is There in a Pint of Doom Bar?

There is 4% alcohol in a pint of Doom Bar when you order it in a pub, whereas the bottled version of Doom Bar is slightly stronger at 4.3%

Sadly, Doom Bar is not gluten-free. Like most beers, it is brewed with malted barley. This is a source of gluten.

Doom Bar is not vegan-friendly, this is because Sharp’s uses isinglass to clarify their beers. This is very common with English ales as they are not filtered in the same way that a mass-produced lager would be.

What Beer is Similar to Doom Bar?

Doom Bar is the most popular cask ale in the United Kingdom. It’s not even an old brewery, less than 25 years old. But thanks to a well crafted beer it has continued to rise in popularity over the years.

The thing is, a lot of the people who you would expect to like Doom Bar (CAMRA members basically) really don’t like it. They complain that the recipe has changed, or that the water used is different so it has altered the recipe.

I can’t really say for sure, as I’m not sure that I drank it before the brewery was taken over by Molson-Coors in 2011. I’ve found the beer to be excellent, but then again, I’m pretty easy to please!

Probably the BEST alternative to Doom Bar would be Tribute by St Austell Brewery. My reasoning? It is considered by many to be the best beer in England, and also, it is brewed in Cornwall. Which is where Doom Bar was brewed until it switched production to Burton on Trent.