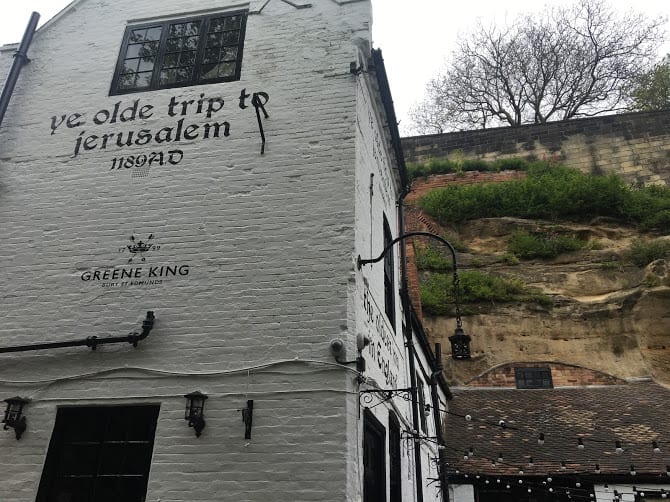 What is the Oldest Pub in Nottingham?

I moved to Nottingham from London in 2018, and by and large, I’d say it was the best decision I ever made. Don’t get me wrong, I absolutely adore London, but I could not be happier with Nottingham as an area. One of the best things about Nottingham is its history. With not one, but three of the oldest pubs in England. But which is the oldest pub in Nottingham?

A Brief History of Nottingham

Nottingham was probably founded sometime after the Roman’s left Britain, and was briefly mentioned as a “City of Caves” during the time of Alfred the Great. It was eventually taken over by an Anglo-Saxon who went by the name of Snot. Thus “Snottingham” was named. Eventually, the S was dropped which is quite frankly a relief. Being called Snottingham would not do wonders for tourism! Nottingham Castle was built in 1068.

Nottingham is perhaps most famous for being the setting for the many tales of Robin Hood. We’re not sure whether he actually lived in Nottingham, or if he even existed. However, we know that the Sherrif of Nottingham did get into conflict with Richard the Lionheart. This is the basis for most Robin Hood stories, so there is at least an element of truth.

Nottingham was known for its textile industry during the industrial revolution, and many of the old textile buildings are still around today.

This is by no means a definitive history of Nottingham, nor is it even a particularly good one! Sadly, I am no historian. But hopefully, this sets the scene for the next section and gives some context to the three pubs.

The Oldest Pub in Nottingham

Known locally as “The Trip”, Ye Olde Trip to Jerusalem is built into the sandstone rock upon which Nottingham Castle is situated. There are caves dug into the rock (known as Castle rock) which the pub appears to have been built around.

Ye Olde Trip to Jerusalem claims to have been established in 1189, and there is a local legend that King Richard the Lionheart (remember him?) drank here on the way to the Crusades. There is little evidence that this is the case, other than the pub itself claiming it to be true. Certainly, the caves that make up part of the pub are even older than 1189, most probably being constructed alongside the castle in 1068. A 1974 archaeological dig proved that the caves were definitely used for brewing beer, meaning that if your definition of a pub is “place that makes beer” you could certainly make a case for there being a pub in this location since 1068!

But obviously, nobody does that! Sadly, medieval records were not exactly exhaustive. It was not until around 1610 that reference was made to a building. It is most likely that the oldest parts of the current pub are from around 1610-1660.

In the late 18th century the pub was bought by William Standford and was rebuilt. At this time it was most likely named “The Pilgrim”. Soon after, the name was changed to Ye Olde Trip to Jerusalem and there is a record of this in 1799. In 1894 the pub was bought by George Henry Ward (nicknamed “Yorkey”). The Ward family owned the pub between 1894 and 1989. Now it is owned by Greene King Brewery.

As with the previous pub, the Bell Inn started out as a system of caves that date back to the 12th century. Before there was a pub, there is evidence of a Friary (think monastery, rather than chips). The Friary was established before 1271 and contained a guesthouse (pub) which is where the current Bell Inn is situated. The Bell Inn was actually constructed in 1420, as a dining room for the monks who lived there. It became an alehouse in 1539.

Because of this, The Bell Inn probably has the best claim to being the oldest continual pub (unless the unfounded claims of The Trip are correct). Due to its location, the Bell Inn has been present during a lot of historical events in Nottingham. It was where the Reform Act riots of 1831 were started and it was once owned by William Clarke (who built Trent Bridge Cricket Ground).

The pub was owned by the Jackson family for over 100 years, from 1898 to 2002. It was then sold to a local independent brewery, before being taken over by Greene King when the breweries combined in 2006.

The final pub on our list is Ye Olde Salutation Inn. It has the easiest backstory, in that we know when it was built in 1240. The building was built to be a tannery and was used by the tanner and his workers as accommodation. The building is, therefore, the oldest on this list. But it was not used as a pub for several centuries! In 1440, there is a record of a man named John Alastre living there, and we know it was not a pub at this time.

I can’t find when the house became a public house, but we do know that it was a pub during the English Civil War as it was used as a recruiting room for Cromwell’s soldiers. The pub was also forced to temporarily change its name from Salutation to “Soldier and Citizen” as Cromwell wanted to remove all trace of religion from it. Like the other two pubs, the Salutation has a hidden network of caves which predate the pub by several centuries.

Notes on the Oldest Pub in Nottingham

In this article, I have written “Ye” as that is how it is written. But “Y” used in this context is actually an old English way of spelling “Th”. So “Ye Olde” actually translates as “The Old”. It would be more accurate to call Ye Olde Trip to Jerusalem and Ye Olde Salutation Inn “The Old Trip” and “The Old Salutation”.

So, Which Pub is the Oldest?

The answer to this question depends on what you would define an old pub as. That’s not me trying to be mysterious, it’s actually quite difficult to say. The Trip has the oldest caves and has the longest association with beer storage and brewing. It also claims to have been a pub since 1189. The Salutation is the oldest building, but it wasn’t a pub until the 17th century. The Bell Inn appears to have been a pub since 1539, but there was a guesthouse on the same spot in 1271.

I would like The Trip’s story of King Richard grabbing a beer in 1189 to be true, and if it was then this would definitely be the oldest pub in Nottingham. I would have to go with the Bell Inn. It has the longest continual record of beer being bought and sold there. The Salutation definitely appears to be the oldest building, but that is not the same thing. If tomorrow,  I served a beer in the Great Pyramid of Giza that would not then make them the oldest pub in the world!

I’ve been to many old pubs in my time, I’ve also been to beautiful gastropubs, brand new craft beer bars, and hundreds of scary pubs. There’s nothing like drinking in a pub that has been around for centuries.

Previous Post What Does NEIPA Mean? All you need to know Next Post What is the Oldest Pub in the World?