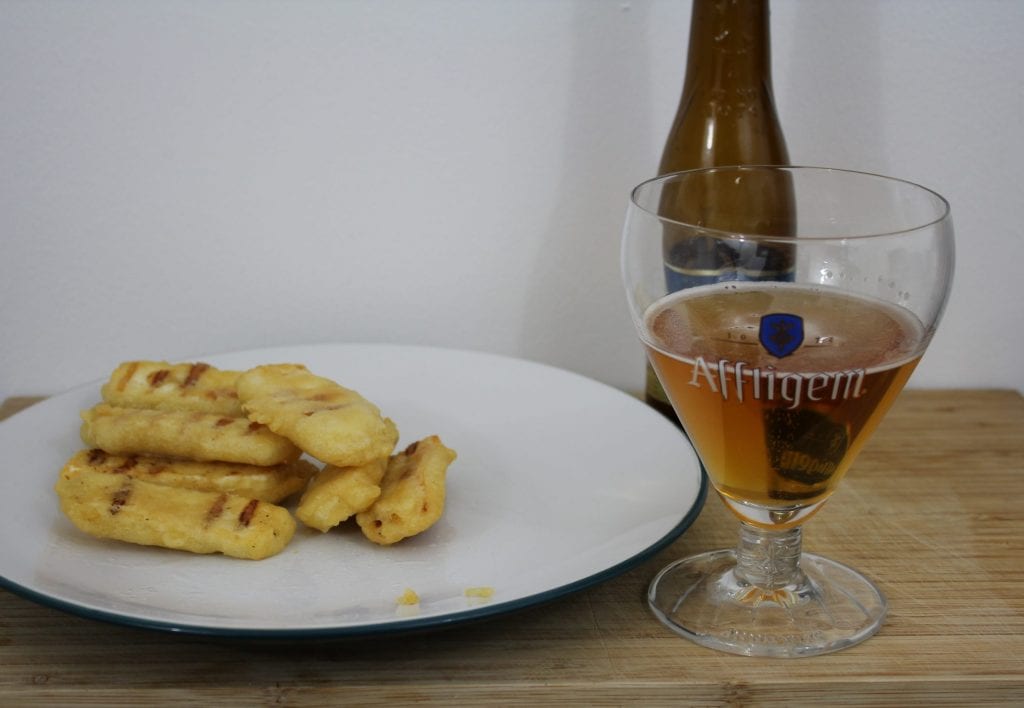 Go into any pub that serves food in England and you’ll almost certainly be presented with a list of foods that have been “Beer battered”. Maybe there is beer-battered fish, or beer-battered onion rings. But what is the perfect beer for beer batter?

Beer is added to batter for several reasons. The main reason is that beer is carbonated, meaning that it contains a lot of bubbles. These bubbles aerate the batter, making it lighter. This is also why lemonade is often used. Beer can also impart flavour on the batter, particularly strong tasting beers. But not all foods benefit from this.

But which beer is best for a beer batter? The purpose of this article is to find the ideal beer for beer batter and test it out.

The Perfect Beer for Beer Batter

This is a difficult question to answer, because there is a debate about finding the ideal beer to match a certain dish, vs finding the best overall beer for a batter. It is first important to delve into why people added beer to batter in the first place.

Beer is an incredibly useful ingredient for batters. Combine flour, beer, and salt and you’ve got yourself a simple, easy to make batter that works fine. For many meals, the batter itself is not supposed to be the star. It provides texture. Because of this, you can use a beer that doesn’t have a particularly strong taste. Beers that are carbonated are ideal. Lagers or pilsners will work really well because the bubbles they produce will help to lighten and aerate the batter.

However, sometimes the beer is added to the batter to improve the taste of the dish. For example, many pubs add London Pride to the batter in their fish and chips. This is because London Pride adds an excellent flavour to the batter. Newcastle Brown Ale works well too. In my article on the perfect beer for Welsh Rarebit, I used Hobgoblin Ruby Ale and also tried Rev James bitter from Brains Brewery. Both of these beers would also work well. They are strong tasting enough to impart flavour, but not overpowering.

For my beer batter (used for beer-battered Halloumi) I used a Belgian Blonde Ale from Affligem. You may remember it from my article on Affligem beer and why I love it so much.

Which Beer for Beer-Battered Fish?

The type of fish that is often used for fish and chips is quite bland in taste. Cod, skate, haddock, are not going to blow you away with powerful flavours. So you don’t want your batter to be too strong tasting. You could either go purely for aeration in which case find the cheapest can of lager possible (maybe even a lager topped with lemonade?). Or you can go down the English pub route and use Fuller’s London Pride.

Personally, London Pride is one of my favourite beers so I would go with that. Newcastle Brown Ale, Hobgoblin, or Rev James Bitter would also make fine choices. 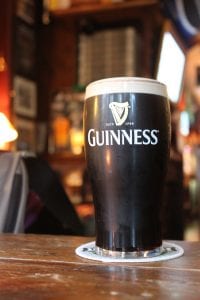 Which Beer for Beer-Battered Onion Rings?

Beer-battered onion rings are absolutely amazing. Mixing beer and onions is something you would do in a beef stew, so it’s not that odd a combination. For this, I would be tempted to make my batter with Guinness. The flavour combination would be great, and it would give the batter a really nice dark colour.

Which Beer for Beer-Battered Halloumi?

You could look for a Cypriot beer such as Keo, or you could use a Greek beer. Whenever I have gone to Greece they tend to drink Dutch beers such as Amstel. Any of these would work fine. I used Affligem because my beer selection in the house was a little light (bloody pandemic!), and that worked fantastically well.

How to Make Your Own Beer Batter

The recipe for beer batter is so simple that I feel a little embarrassed dedicating an entire section to it. But here we go. This beer batter can be used for any meal, just pick the beer you want to suit the food. If you’re deep-frying Mars bars then maybe a Guinness or porter? If you’re deep-frying Sweet and Sour pork balls, then maybe a Chinese beer? Decide which beer suits your needs. For this recipe you will need:

I used 125g of flour, two teaspoons of baking powder, and around half a bottle of beer. You can just use enough beer to make the mixture slightly runny. All you do is get a mixing bowl (I used a measuring jug because I’m a rebel). Chuck the flour in, add the baking powder, then stir. Once the flour and baking powder are mixed together you can add the beer. A little at a time. Keep stirring. At first, you’ll have a very thick paste, add more beer until the paste is just beginning to become a sauce.

How to Make Beer-Battered Halloumi 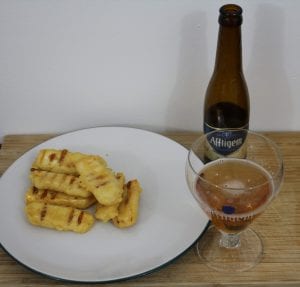 I wasn’t planning on including this part, but the beer-battered Halloumi I ended up making was so amazing that I just had to! All you do is purchase some good-quality halloumi cheese (I bought the rubbish kind and would NOT recommend it). Then cut it into quite thick slices, then slice them down the middle so that they are more like batons. Heat a griddle pan, and brush the halloumi batons with olive oil. Once the pan is really hot (technical chef term) place the halloumi batons on it and leave for about 2-3 minutes.

Flip the cheese over and you should hopefully have some nice griddle lines on the back. Keep the cheese on a reduced heat for an extra 30 seconds or so then take off the heat. Next, you want to prepare for some deep-fat frying. I don’t do this very often. I say it is because I am health-conscious, but mostly it’s because the idea of deep-fat frying terrifies me. Too many 90s tv shows where the chip pan sets fire to a child I guess!

But provided you’ve got a big enough pan, it is nowhere near as scary as you’d think. I used a mixture of vegetable oil and light Olive Oil. Because I ran out of vegetable oil way too quickly! I filled the pan so that it was about half an inch full. I then put the pan on medium-high heat and proceeded to dip my halloumi batons in the batter.

Once I had dipped each baton, I put it into the oil (I used tongs as they allow you to place it in carefully). If you place each baton clockwise around the pan then you’ll be able to remember which one went in first. After putting in the 8th (and last) baton, I turned over the first baton. It had been in there for around 80s or so. I turned over the rest of them. By the time I had done that, the batons were pretty much ready.

I turned the oil down to low and left them in there to turn golden. Then I used the tongs to take each baton out and place on a kitchen towel. Then it was 20 minutes of pissing about trying to get a photo of them! They’re really nice on their own, or you could make a dip for them. Why not try drizzling them in some Greek honey? It’s a shockingly good combination.

So there you have it. Not only have I helped you find the ideal beer for beer batter, but I’ve also provided you with a recipe for the most addictive snack I’ve ever consumed! I’ve always assumed that stuff like this was super difficult to do. But actually it may just have been the easiest thing I’ve made in a long time (not including the crisp sandwich I had last week). There wasn’t much weighing of ingredients needed, I just used my gut for the times, and there were barely any steps to follow.

This is definitely worth giving a go. Just remember, if you start an oil fire use a damp tea towel to smother the flames! Also try not to accidentally pour hot oil over yourself or your loved ones. I really can’t stress this enough … it will ruin your weekend.

Previous Post Finding the Perfect Beer for Welsh Rarebit Next Post What is the Best Beer for Beef Stew?