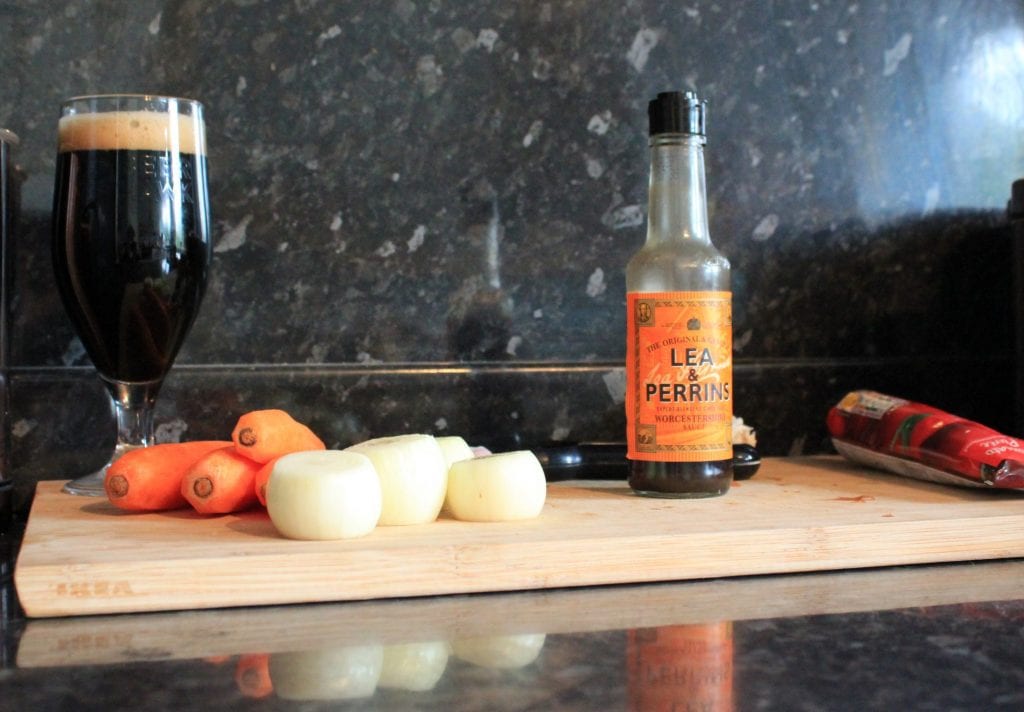 What is the Best Beer for Beef Stew?

Beef stew is one of the easiest meals you can make, I’ve tried it loads of times in the past. But after cooking a few meals with beer in them, I wanted to try a beer-based beef stew. But what is the best beer for beef stew?

The ideal beer for beef stew would either be a dark ale, a stout, or a porter. Guinness is a popular choice for beef stews, but any stout would work really well. Alternatively, you could try a Belgian beer. This would add a really unique flavour to the sauce.

In this article I am going to defend my beer selections, explain why beer helps to improve a beef stew, and I will give you a recipe for beef stew that I have used myself.

For years, wine was the go-to alcoholic drink for cooking. This makes sense, as wine is delicious and pairs well with many foods. However, beer has often been overlooked. Which is crazy, because if you think about it beer has a lot of advantages over wine.

For starters, beer is more economical to use. I’m not a big wine drinker, so bear that in mind while I make this argument. Whenever you want to cook with wine, you have to open a large bottle just so that you can use a relatively small amount. If I want to add red wine to my gravy or white wine to my roast chicken, then I have to open an entire bottle. When you use beer, you can just open a much smaller bottle or a can.

Beer also has many more flavour options to choose from. Yes, I know that many red wines taste different from each other. But in general terms, you have red wine, white wine, sparkling, rose, and dessert wines. Not only are there more varieties of beer (wheat, stout, porter, mild, pilsner, IPA, NEIPA, ale, bitter), but those varieties can each be adapted to taste however you like. You can get cherry flavoured beers, smokey beers, chocolate beers, coffee beers, sour beers, coriander beers. The list goes on and on.

I’m not saying this because I dislike cooking with wine, nothing could be further from the truth. But it is frustrating that cooking with wine is pretty much ubiquitous, yet beer is mostly used for beer can chicken, or beer-battered cod.

What is the Best Beer for Beef Stew

While I may have outlined all the thousands of beer variations there are. Not all beers are appropriate for certain meals. Hoppy beers such as IPAs or NEIPAs don’t really work with cooking. The reason is that once you’ve boiled beer a lot of the water (and all of the alcohol) evaporate, leaving you with a much more bitter tasting beer. This is not a problem for many beers, but for beers that were already quite bitter, this can ruin the taste of your food.

Ales, bitters, stouts, porters, and milds, are perfect beers for cooking. Any of them would work really well in a beef stew. Belgian beers are also ideal for cooking, but economically they’re not the best option. Unless you live in Belgium! For my beef stew, I chose a stout. I wanted to use Guinness, but I sent my partner out and she managed to get a completely different stout. I’m not complaining for two reasons: 1) The stout she chose worked really well, and 2) She terrifies me.

I would have been very interested to try a porter or even a mild for this stew. The stout worked amazingly, but it was a little obvious. Using stouts in a beef stew is not a novel idea. But there is a reason why everybody does it. The stout imparts an excellent richness to the sauce, and it doesn’t overpower the flavours of the meat and onions. The colour is also incredible (though due to my novice photography skills, there is no way to demonstrate this).

The beer I used for this stew was Mackeson Stout. It is a milk stout that is brewed in Kent and has been since 1907. It is very low in alcohol, just 2.8%. If given the choice would I use Guinness? Yes, probably. Though maybe that is because I’m a sucker for a good marketing campaign. This stout was cheap, tastes really nice, and it didn’t make me sad when I poured it all over my food.

How to Make a Beef Stew

I cannot promise you the greatest stew of your life. I am not a chef, I am a guy who drinks beer and writes articles. However, I do enjoy cooking, and ridiculously simple meals such as this are hard to fuck up! There may well be better recipes out there, but this is mine. 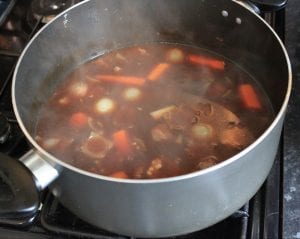 Chop your onions up into quarters, or eighths if you have 2 medium/large onions. Peel your carrots and then cut them into chunks (is there a chef word for that?). Peel your garlic and then either blitz it in a food processor or find some way to crush it.

You’ll want a large pan for this, pour some oil into it, wait till it is hot and then add your diced beef. Cook for three minutes or so and then lower the heat. Next you’ll want to add the carrot and onions. Chuck some flour over all of this, and then add your crushed garlic.

Stir it all around before adding your stock, then pour in your stout. Bring this to the boil, and then add your tomato puree and Lea & Perrins. Set your oven to Gas Mark 3, and then place the pan (with a lid on) into the oven. It needs to cook for 2 hours.

At this point, you’ll want to make sure that your pan lid is oven-suitable. Mine wasn’t and had started to melt by the time I took it out of the oven! What I learned from this is that you can alternatively cook your stew on a gas hob, provided the temperature is low and you remember to stir it every once in a while.

This was supposed to be served with mashed potato but I left the potatoes for my partner to cook, and she couldn’t be arsed (after spending the majority of the day napping) so instead, we had it with new potatoes. Which were fine (it’s hard to convey passive-aggressiveness in this format, but really imagine it when I say “fine”).

We also had cabbage with it, which was surprisingly good. 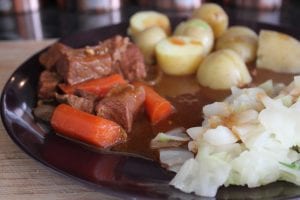 FYI, it is fucking difficult to take photographs of food! I always suspected it would be (because I’ve seen so many shite photos of people’s food on Facebook). But wow! You need a good camera, good lighting, you need to artfully arrange the food … and it still comes out looking like this (see disappointing photo above). Irritating!

Bet the mash would have looked better!

Final Thoughts on the Best Beer for Beef Stew

When planning out my articles, I wrote down a bunch of food ideas. Welsh Rarebit, Beer-Battered Halloumi, and Beef Stew. Out of these three recipes, I was least looking forward to doing this one. Beef stew is boring. It looks rubbish in photographs, it isn’t particularly exciting to cook, and I’ve had so many terrible beef stews in my life. Then I got the wrong beer, and the Mrs decided that boiled potatoes were a good idea … but you know what?

I really enjoyed this meal. It may not have been as awesome as the halloumi was. But it is going to last us three meals, and the smell wafting out of the kitchen while it cooked was incredible. I’m really pleased with how this turned out, and definitely think it would be worth doing again.

But what about you? Any clever tricks or family traditions that you can think of? Have you tried a different beer? What were your thoughts? Please let me know in the comments section, and I’ll give it a try next time.

Previous Post Finding The Perfect Beer for Beer Batter Next Post Does Beer Hydrate You? An In-Depth Look