XPA Beer: Everything You Need to Know

Over the last few years, I’ve noticed the term XPA crop up again and again. But I had no idea what it meant. In this article, I am going to take an in-depth look at what XPA beer is, and why you should care about it?

XPA beer stands for Extra Pale Ale. XPA’s are beers that don’t quite fit into the category of IPA or American Pale Ales (APA). They tend to be big on flavour, with a lot of hops. But they are also not too strong in alcohol. Usually around 4-5%. They tend to use American hops rather than English ones, so often have strong citrus flavours. XPA is not an official beer style, so it is open to interpretation.

Now that we have an idea of what XPA beer is, it is time to take a more in-depth look at XPA beer, and pale ales in general. Because beer shouldn’t be this confusing!

What Does XPA Beer Stand For?

XPA beer stands for Extra Pale Ale. This is not an official beer style like a stout or a porter would be. It is a term that some brewers have started using to describe their beers. Depending on your outlook, this is either a clever way to define beers or needlessly complicated. I can understand both points of view.

The only way that I can properly explain what an XPA beer is, is to go into the history of pale ales. So that’s what I’m going to do now.

A (Quick) History of Pale Ales

Before pale ale, beer in England was often terrible. The malt used to brew beer was often roasted on wood or peat fires. This would give the beer a very smokey flavour, sometimes this would work. Particularly with porter beers. But often, the beer was not particularly enjoyable. During the 17th century, brewers began to use coke (from charcoal … not the other kind) to roast their malt. This removed the smokey taste and also didn’t brown the malt as much. Making the beer paler in appearance.

The first known mention of the term “pale ale” was around 1703, and by the 1780s was in general use. By the early 1800s, pale ales were commonly referred to as “bitters.”

This continued until a chemist known as C.W. Vincent found a way to recreate the chemical composition of Burton’s water (it involved adding a lot of calcium sulphite). This helped other breweries to use water that accented and highlighted the delicate hop flavours of pale ales from Burton Upon Trent. 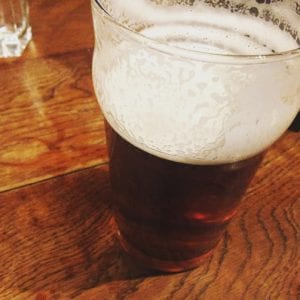 Pale Ale was often known as “Bitters” in England, as it was stronger tasting than mild (another common beer). A typical pub in England would sell Pale Ale, Mild, Porter, and maybe a stout. Pale Ale and Mild would both look quite similar, but the pale ale would have a more bitter taste (thanks to the hops). Today, most beer drinkers are unaware that their pint of bitter is a pale ale.

It’s important to note that while pale ales may have tasted bitter to people in the 19th and 20th century, you would not think of them as particularly bitter or “hoppy” today. Not compared to IPAs or NEIPAs. Speaking of which …

While all of this important brewing was going on, there was a little thing known as empire-building that Britain was busy with during the 17th to 20th century. This involved a lot of logistics. Transporting your favourite beers around the world was very important. But whereas stouts and porters were able to survive long sea voyages intact, pale ales did not fare so well. While pale ales were struggling, a form of beer known as October Beer was thriving.

This type of beer is brewed with a lot more hops than pale ales and is designed to improve with age. As you can imagine, this beer would thrive on long sea voyages to India. October beer was very popular for a while until the London-based brewery that made it was taken over by another brewery. Samuel Allsop (who took pale ale from London to Burton) decided to start adding more hops to his pale ales, creating the India Pale Ale.

Other breweries in Burton Upon Trent followed suit, and suddenly there was a new form of beer. India Pale Ales, or IPAs. These beers were stronger, hoppier, and more expensive than porters and regular pale ales. The IPA stayed popular in England for years, before continental lagers began to take over the market. 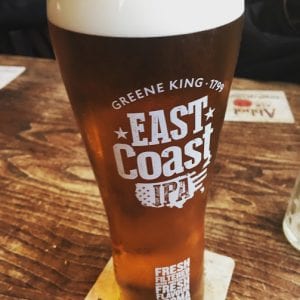 In the 1970s and 80s, home brewing exploded in popularity in America, which led to the re-emergence of beers that had fallen out of fashion. IPAs proved popular with American homebrewers.

What made these IPAs stand out was the use of American hops, which led to much more citrus-like flavours. This completely changed the game for IPAs. Something that had once been quintessentially British was now global.

American IPAs are quite a bit stronger than English IPAs, both in taste and in alcohol content. Recently there has been further sub-divisions of American IPAs such as West Coast IPA and New England IPA which you can read about in my article on NEIPAs. Most American IPAs are around 5-6% alcohol, but you can find loads that are between 6% and 7%!

An Extra Pale Ale makes you think of something that is very weak in alcohol and almost translucent in colour, but this isn’t the case. While it is lighter in colour than an English IPA, it is about the same colour as an American IPA. The beer will use American hops, so expect some fruity flavours. XPA beers usually aren’t quite as fruity as some American IPAs, but this varies across the different beers.

XPA beers fill a gap in the market. They are hoppier than English IPAs and tend to be a little stronger. But they aren’t as strong as most American IPAs. Think of them as low-alcohol West Coast IPAs, with strong flavour but easier to drink a few pints of while still functioning.

The XPA by Five Points Brewery in London is a great example of an XPA beer. It uses a combination of American hops (Citra) and Australian hops (Galaxy) which provide bitterness, and tastes of mango and passionfruit. But it is only 4%. It has proven so popular that Five Points have added it to their core range.

Another interesting (English) example of an XPA is the XPA Extra Pale Ale by Hawkshead Brewery in Cumbria. It is just 3.5% making it the perfect session IPA,  but a little on the weak side for most XPA beers. As with Five Points’ beer, the Hawkshead XPA uses Citra hops from the US. But it also uses an English hop variety known as Jester. This variety of hops is designed to be very similar to American hops, it has a bitter taste and notes of grapefruit and tropical fruits.

Then you’ve got an Australian XPA beer by Western-Australian brewery Little Creatures. Only 4.9% alcohol, and made with a variety of hops. Nowhere near as bitter as most American IPAs, but more flavourful than an English IPA. This beer is right in that gap between the two, and more than lives up to its label.

Is the XPA Beer Category Necessary?

I feel that the XPA category is unnecessary but harmless. Yes, there is certainly a gap between a traditional English IPA and the American IPA. But that gap is less defined than people assume. High alcohol, hoppy English IPA and a low alcohol American IPA would be indistinguishable. Except for the different hops used. I don’t see how an XPA clarifies anything because the definition of an XPA is too broad.

After a lot of research, I’m still not particularly clear on what makes an XPA beer different from other forms of IPA. This feels more like a marketing move, trying to create a new category of beer which will get the attention of punters.

But punters, for the most part, don’t give a shit!

So long as the beer tastes nice, looks good, and is a reasonable price. Most people won’t care what category it fits into. I’ve been massively interested in beer for 12 years, but until today I didn’t realise that a pint of bitter was a pint of pale ale. Don’t get me wrong, that’s interesting. But not knowing it hasn’t affected my life at all.

If this category helps people who know more about beer than me, then great. But at the moment, I just don’t think that XPA is distinctive enough to warrant its own category. I’ll be happy to be proved wrong though!