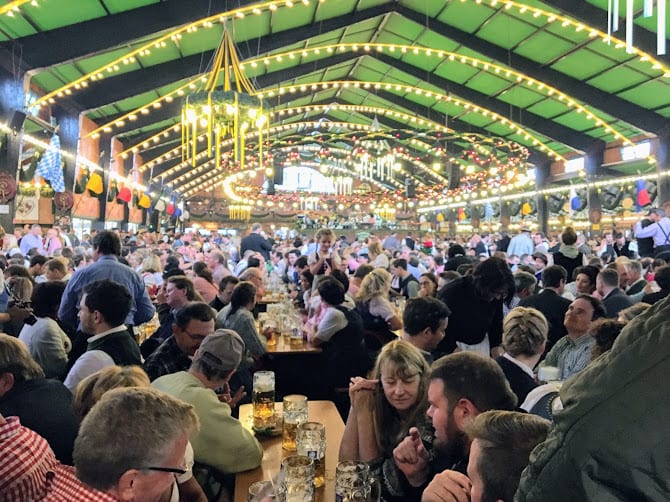 What is German Oktoberfest? A Quick Guide

The largest beer festival in the world is held in Munich, Germany every year around late September/early October. It is called Oktoberfest. But what is German Oktoberfest? In this article, we will take a brief look at the history. Throw in some interesting facts, and help you understand why a Bavarian would be irritated that you said German Oktoberfest!

A Brief History of Oktoberfest

In October 1810, King Ludwig I of Bavaria married Princess Therese of Saxe-Hildburghausen. All of the citizens of Munich were invited to attend a festival to celebrate. See, in the early 19th century, Germany, as we know it today, did not exist. Today, Bavaria is a free state that makes up most of South-Eastern Germany. There are three main cities within this state: Munich, Nuremberg, and Augsburg. In 1871, Bavaria joined the German Empire, and in 1949 it became a free state of Germany.

So, when you talk about German culture and Bavarian culture you must understand that they are not the same thing. It would be a little like talking about Welsh culture and English culture being the same. There are similarities and they both makeup parts of the United Kingdom. But there are also several differences and a (mostly) friendly rivalry.

Anyway, back to Ludwig and Therese. The festivities took place in a field outside the city, and the fields were soon named Theresienwiese (Therese’s meadow). Oktoberfest is still held around the fields, but they are now known as “wiesn”. The festival did not start out as a solely beer-fuelled party, there were horse races, bowling, and athletic competitions. Oktoberfest may even have been the inspiration for the modern Olympics!

There was a parade added, and a carnival and Oktoberfest became a celebration of Bavarian culture. This is still the case today, while you get a lot of tourists dressed up in Lederhosen. You’ll also find that almost all of the Bavarian participants are wearing the traditional outfits.

Oktoberfest has been frequently affected by historic events. It was cancelled during the Napoleonic wars. Bavaria joined France (not that it had much choice in the matter) to fight against Prussia. It was also cancelled for the Austro-Prussian War, the Franco-Prussian War, and World War I. Hitler used Oktoberfest to further his propaganda. There was no Oktoberfest during World War II.

In 1980 a right-wing terrorist group set off a bomb during Oktoberfest, killing 13 people. Today, Oktoberfest is massively security-conscious. Something that visitors notice immediately when entering.

What is German Oktoberfest?

Oktoberfest is what is known as a “Volkfest”, a German beer festival and carnival (volk meaning folk). It is held in late September every year and lasts for 16 days. This includes the 3rd of October, which is German Unity Day (where Germany celebrates the unification of East and West Germany). Visitors number in the millions, with 3/4 coming from Bavaria.

You don’t need a ticket to enter Oktoberfest, and there is no queueing to get in. But you do need a ticket to sit down on one of the benches in the evening. When I went to Oktoberfest with my dad (2017), we were able to sit at a bench during the day. We lasted about 3 hours, had 5 litres of beer and a roast chicken, then passed out in our hotel rooms by 4pm! We returned in the evening to find that every tent was absolutely packed with visitors. 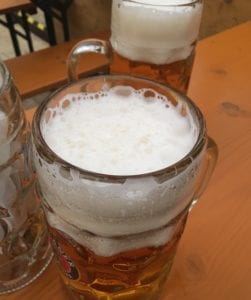 The whole area is basically a collection of tents and fairground rides. Each tent is unique, serving a particular beer. But all the tents are quite similar. Large benches, a band, thousands of people, cool decorations.

Due to the popularity of Oktoberfest, there have been hundreds of Oktoberfest-style events. I’ve been to several of them. They are a lot of fun, but to be honest not a patch on the real thing. The beer is not as good. The real Oktoberfest only allows beers that are brewed within the city limits of Munich. But in the London Oktoberfest, they were serving £9 steins of Strongbow Cider!

Don’t think that I’m being snobby here. As I said, the copy-cat festivals are still fun. It’s just that my experience of the real thing was amazing. Even though I only managed to sit outdoors during the evening. Listening to the traditional music (and then the terrible music after 6pm), drinking the beer, eating the food. It was all so incredible.

I hope that this has been useful. I’m going to do a much more detailed post on Oktoberfest in a few weeks.