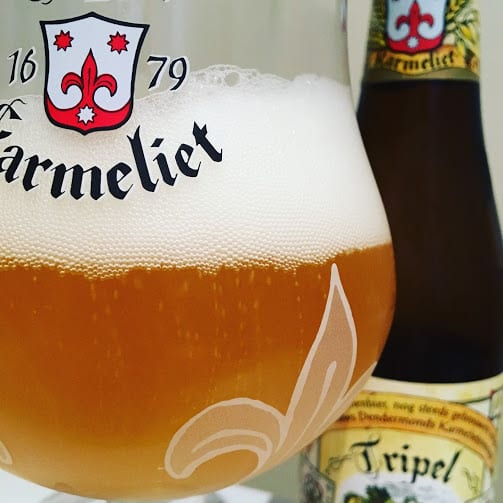 How Does Beer Affect Your Hormones?

I have always been fascinated by the effects of hormones on our health, and vice versa. I find it very interesting how sleep, stress, exercise, and security can tangibly affect hormones. So naturally, it wasn’t long until I began to wonder “How does beer affect your hormones?”

Beer drinking can have a number of effects on your hormones. Drinking can increase dopamine and endorphin release, while also elevating cortisol. Alcohol can suppress the hormone that is responsible for stopping us from needing to urinate and can also have an effect on the hormones that regulate appetite. Prolonged drinking can affect the sex hormones testosterone and estrogen.

In this article, I am going to discuss how drinking beer can affect different hormones in your body. This will not be an exhaustive list but should give you a good idea. The main aim of this article is NOT to put you off drinking, it is to educate you on how alcohol can affect you in both the short and long term.

How Does Beer Affect Your Hormones? 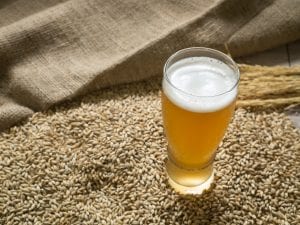 Glass of beer on malt grains

Beer is usually made from just four ingredients: Water, Grains, Hops, and Yeast. So how can it affect you at a hormonal level? Well it is probably not a big surprise that it is the alcohol content of beer (usually around 4-5%) that actually affects your hormones. Though it should also be pointed out that your hormones are constantly adapting to different situations, both in the short-term and the long-term.

A Quick Guide to Hormones

Hormones are often thought of as sex-specific, but there are many different types of hormones with a variety of different functions. It is best to think of hormones as chemical messengers because that is what they do. There are two ways in which hormones work: Ones that send messages to other hormones, and ones that send messages to organs. Hormones are made in the body by the endocrine system.

Testosterone is the male sex hormone, though women also produce small amounts of it. High testosterone levels have many benefits for men. Improved libido, fertility, strength, and a reduction in body fat can all be attributed to healthy testosterone production. But often, men tend to produce less testosterone than they require. This can be down to many factors, genetic, lifestyle, environmental.

The annoying thing about low testosterone levels is that they can lead to side effects that further lower testosterone, creating a vicious cycle. Low testosterone can lead to insomnia, bad sleep can lead to reduced testosterone and increased appetite. This can lead people to eat more food during the day and exercise less. Which causes them to gain weight, which leads to a further reduction in testosterone! 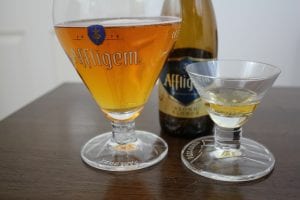 The effect of alcohol on testosterone is an interesting one.

A 2003 study found that testosterone levels increased in men who consumed a low dosage of alcohol. This appears to be short-term though, and the study found no such increase in women.

When it comes to alcohol and testosterone, it really comes down to how much you are consuming. Chronic alcohol abuse has been shown to reduce testosterone production, reducing fertility and libido.

The good news is that women’s testosterone levels are for the most part unaffected by drinking beer, while men should be fine provided that they aren’t drinking more than they should. If you are, then:

will help to turn things around.

Quick Note: I have been writing about testosterone and estrogen for five years as a freelance fitness and nutrition writer. Almost all of this work has been for American clients. So I now spell Oestrogen as “Estrogen”. I am sorry, but “Oestrogen” looks weird to me now!

Estrogen is the female sex hormone, but men also produce small amounts of it. As with testosterone, light to moderate drinking will have no real effect on estrogen levels. Whereas heavy drinking can. It appears that chronic alcohol abuse can lead to the conversion of testosterone to estrogen.

This could be down to an enzyme known as aromatase, which is a big issue in the bodybuilding world. When working correctly, aromatase converts excess testosterone into estrogen. This helps to provide the right balance for health. Bodybuilders are known for steroid abuse which fills their body with massive amounts of testosterone. This can cause the body to freak out and producing aromatase to convert that testosterone into estrogen. The body thinks its helping, but it really isn’t!

There is some evidence that chronic alcohol abuse can lead to increased aromatase production in the liver, which can explain why many alcohol men have reduced testosterone and increased estrogen.

In women, excess estrogen is even more of an issue. Heavy drinking may increase the risk of breast cancer, due to the rise in estrogen production. As with testosterone, estrogen will only be seriously affected by chronic alcohol abuse. If you drink within the recommended guidelines you’ll not have to worry about any side effects.

Cortisol is known as the stress hormone, and because of this it gets a bad rap. But your body doesn’t produce cortisol just to spite you! It has many benefits, provided your cortisol levels are normal. Cortisol can help to regulate your blood sugar levels, your metabolism, and it can also reduce inflammation. If your body doesn’t produce enough cortisol then it can cause several negative effects such as muscle loss, fatigue, and mood swings.

Having too much cortisol can be just as serious though, it is particularly bad for causing weight gain. It can also affect sleep quality, mood, fertility, and your ability to recover from exercise. As you can see, it is beneficial to have your cortisol levels in check.

The study cleared up the chicken and egg question. Whether people with high cortisol levels became alcoholics, or whether being an alcoholic increased cortisol. It is clearly the latter, as the abstinent alcoholics had normal levels.

How Does Beer Affect Endorphins?

The main reason that we drink beer is the effect that it has on our endorphins. Sure, many of us enjoy the taste of beer. But there is a reason why non-alcoholic beer is not the number one drink in the world!

Endorphins are peptide hormones that are produced in the pituitary gland. They are what’s known as opioid peptides, and are responsible for that “high” feeling you get. They are usually released by the body in response to pain. But they can also be released while exercising, during sex, when listening to music, or while drinking alcohol.

Light to moderate drinking can trigger the release of endorphins, reducing anxiety and relaxing us. But heavy drinking has no effect. There is a lot of speculation that it is chasing this endorphin release that can lead to alcoholism in some people. But scientists aren’t certain why some people are affected while others aren’t. How some people can stop drinking after two pints and enjoy the high, while others can’t stop.

How Does Beer Affect Dopamine?

Dopamine is a hormone and neurotransmitter that is released by the hypothalamus. Dopamine is often described as the pleasure hormone, particularly on tv and in films. But dopamine is more a motivational hormone. If you are constantly procrastinating, then it could be down to a lack of dopamine. It’s an understandable mistake to make as dopamine is tied up with endorphins. It is also directly affected by drugs such as cocaine and amphetamines.

According to a 1997 study, even low alcohol intake can increase dopamine release. Unlike endorphins, dopamine is still released during heavy drinking. Which is why it is believed to be one of the main drivers behind alcohol addiction.

How Does Beer Affect Vasopressin?

If you’ve already read my article on how beer affects hydration, you will know a lot about vasopressin. This is the hormone that tells your body not to urinate. As you can imagine, it is a pretty useful hormone! Unlike many of the other hormones in this article, vasopressin is not affected in the long term.

Alcohol has many effects on the body, one of them is the suppression of vasopressin. Reducing the amount of vasopressin tells your body that you need to urinate. Meaning that your trips to the toilet are about to double. This is why alcohol is seen as a diuretic, and one of the main reasons why hangovers are so unpleasant! Drinking water alongside your beers can make a small difference, but it is not a magic anti-hangover cure.

What about Leptin & Ghrelin?

Leptin and ghrelin are two of the most important appetite-regulating hormones. There are several others, but these two are the main ones. Leptin is known as the satiety hormone, it tells your brain that you are full after a meal. Without leptin, you could theoretically never feel full. Ghrelin does the opposite job, making you feel hungry. Both leptin and ghrelin are vital hormones in energy regulation.

The idea is that while you are drinking your hunger is suppressed by the alcohol. Once you stop, ghrelin will increase and your appetite will increase with it. If you’ve ever drunk in a pub for eight hours with not so much as a packet of crisps, only to eat two kebabs on the way home after then you’ll recognise this immediately!

Ghrelin levels are increased in the long-term in chronic alcoholics, which may explain why many alcoholics can gain weight – particularly if they are trying to stop drinking. But it is leptin that really affects chronic drinkers. Alcoholics have been shown to have increased leptin levels, with many scientists now believing that this is responsible for alcohol cravings.

Mitigating the Effects of Alcohol on Your Hormones

As you can see, most of the effects of alcohol on your hormones are pretty mild. Unless you are drinking at an unhealthy level. In which case, the side effects can be pretty pronounced. The good news is that any hormonal issues are reversible. Once you kick the habit!

But let’s say you’re only worried about the effect of beer on your hormones in the short-term. How can you avoid any of the common issues?

This type of article may cause you to worry about how beer (or any form of alcohol) can affect the body. But please understand that drinking in moderation, or even drinking a bit more than normal is unlikely to cause any issues. I don’t want anybody who reads this to start getting a complex.

If you genuinely are drinking enough that this type of article is worrying then … good? While I think that beer has a place in a healthy diet, alcoholism is a horrible disease to have to deal with and the sooner you get help the better. If this is the wake-up call you need then great.

Hopefully, this article has helped put your mind at rest. No, a couple of pints after work is not going to destroy your muscles and give you an amazing set of tits. But prolonged binge-drinking or alcoholism can and will affect your hormones and your health. This is probably not a great surprise to anyone.

So, how does beer affect your hormones? Not much, provided you drink sensibly.

Drink good beer responsibly, avoid shit beer. Identify bad drinking habits, and enjoy your life. That’s my advice. All I need to do now is put that advice on a picture of a sunset and it will be social media GOLD.