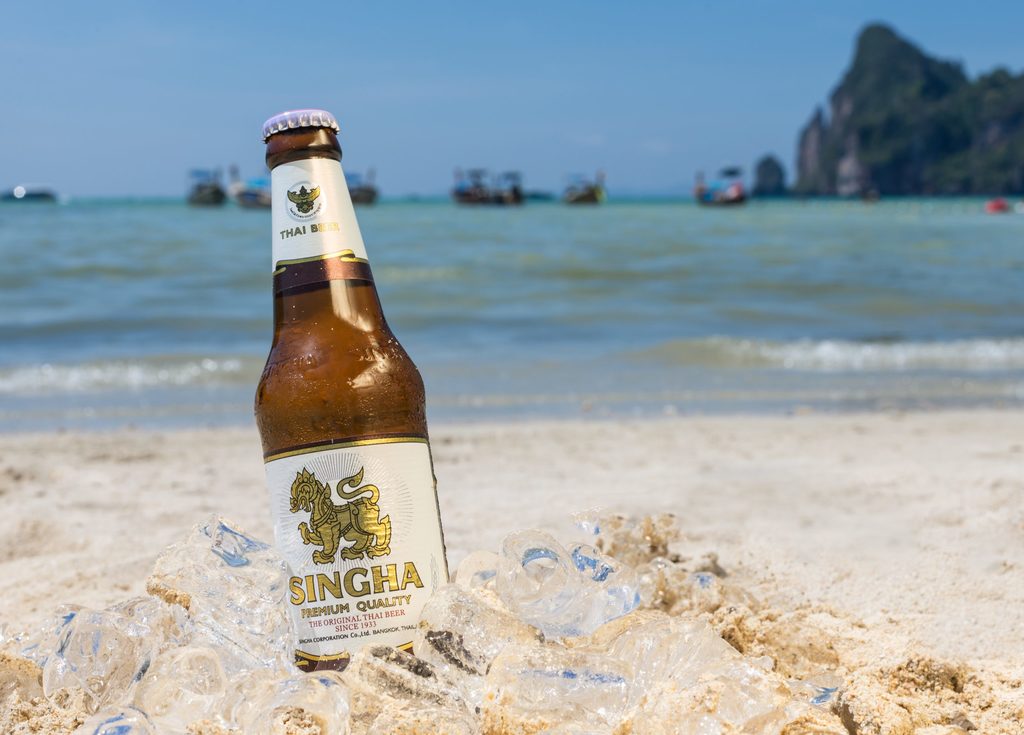 Singha Beer Fact File: Everything You Wanted to Know

Singha is a Thai beer that is immensely popular both in Thailand and in the UK. But how many calories are there in Singha beer? How strong is it? Is Singha beer gluten-free? Or vegan? What beer is similar to Singha beer? Let’s find out.

There are 113 calories in a 330ml bottle of Singha beer. It is 5% abv. Due to Singha beer being brewed with barley, it cannot be gluten-free. However, it does appear to be vegan.

In this article, I will answer each of the questions above in more detail, and talk about beers that are similar to Singha. In case you fancy a change.

How Many Calorie Are There in Singha Beer?

After writing several articles in a row where the beer in question had zero-calorie information to work with, it is incredibly refreshing to be able to give you nutrition information straight from the Singha website!

How Much Alcohol is There in Singha Beer?

Singha beer is 5% abv, which is fairly average for a lager. There appears to be no difference in strength between canned, bottled, or draught Singha.

Singha beer contains barley, so it cannot be considered gluten-free. There does not appear to be a gluten-free version of Singha either, something that a lot of other breweries are investing in.

Yes, because Singha beer does not use isinglass finings to clarify the beer (remove sediment and yeast) it can be considered vegan-friendly. To learn more about isinglass finings and whether beer is vegan or not, check out my article on the subject.

What Beer is Similar to Singha?

The first beers that come to mind are other Thai beers. Tiger beer, Chang, Leo, and Phuket. Other Asian beers that are similar would be Snow beer and Tsingtao beer from China.

Cobra, Kingfisher, Mongoose, and Bira 91 from India. Any of the Japanese beers, Asahi, Kirin Ichiban, and Sapporo. Check out my article on Japanese beers to learn more.

As is the case for pretty much every lager, Singha beer is a pilsner. This means that it was influenced by Czech and German lagers. The Czech Republic is where the pilsner style of lager was first invented. While Germany can take credit for exporting their pilsner expertise around the world.

Czech beers that you might want to try include; Staropramen, Pravha, Pilsner Urquell, Budvar, and Kozel.

Then you’ve got German pilsners such as Veltins (my favourite pilsner), Beck’s, Holstein Pils, Flensburger, Bitburger, Rothaus, and Augustiner Pils. Check out my article on Beer in Germany to learn more.

Singha is a very good beer in its own right, but I feel that it is one of those beers that only works in context. If you are enjoying a Singha with an amazing Thai meal then perfect. But on its own? There are other pilsners that I would go for instead. Probably a German one to be honest!