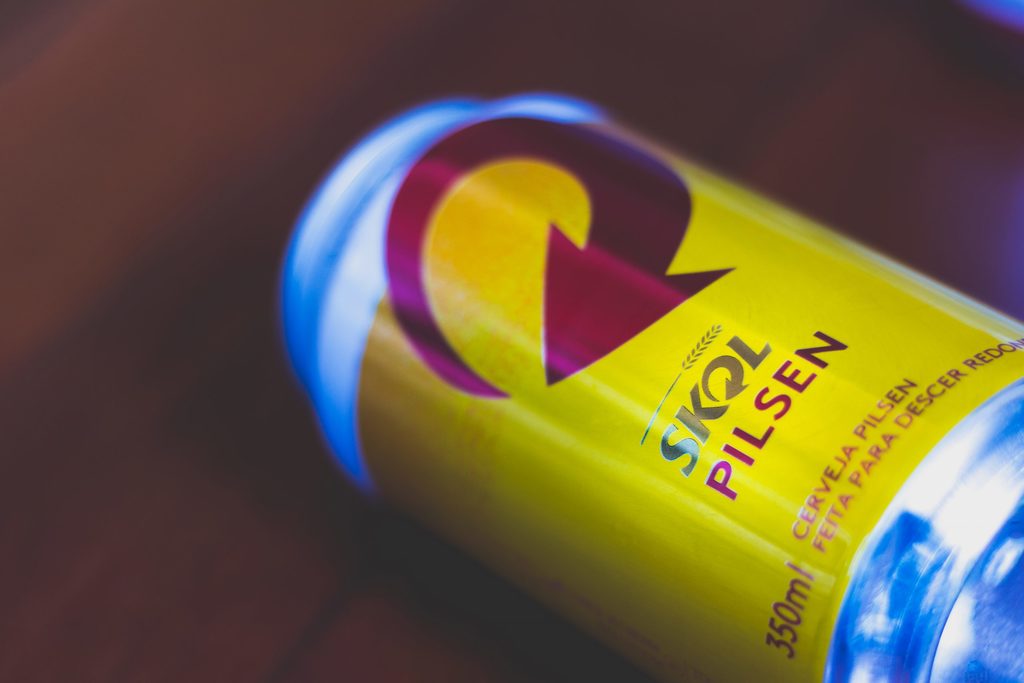 Skol Fact File: Everything You Wanted to Know

Skol is a Scottish beer that inexplicably became massively popular in Brazil. So much so, that the Brazilian version is one of the biggest selling beers in the world. But how many calories are there in Skol? How strong is it? Is Skol gluten-free? Or vegan? What beer is similar to Skol?

The UK version of Skol contains 106 calories in a 440ml can, while the Brazilian Skol would be 176 calories. UK Skol is just 2.8% while Brazilian Skol is 4.7% abv. Skol is not gluten-free as it contains malted barley. Skol is vegan.

For this article to make any sense, you must understand that there are several versions of Skol. You’ve got the UK version which is owned by Carlsberg, then there is Skol Super (which is much better known in the UK). Finally, you’ve got Brazilian Skol which is the same company but looks completely different!

The cover photo for this article is the Brazilian Skol, but I will be talking about both in this article.

How Many Calories Are There in Skol?

Now that UK Skol is so much lower in alcohol than it used to be, the calories are lower too! Skol contains just 24 calories per 100ml. This is about half of the calorie content for a regular lager.

Case in point, Brazilian Skol which contains 40 calories per 100ml. As I don’t speak Portuguese, I was unable to find the nutritional information for Brazilian so had to use the Calorie Calculator to estimate the calories.

How Much Alcohol is There in Skol?

The UK version of Skol is just 2.8% abv, making it one of the lowest alcohol lagers in the country. The Brazilian version is a much more normal 4.7% abv. Skol Super (still available in the UK) is 8% abv.

Due to Skol being brewed with malted barley it cannot be considered gluten-free.

Yes, due to the fact that Skol does not use isinglass finings (or similar animal products) to clarify the beer and remove sediment, it can be described as vegan.

What Beer is Similar to Skol?

It’s kinda funny, for years I always associated Skol with Skol Super (or Super Skol as I called it) which was one of the strongest beers you could find. It was 9% abv, but has now dropped down to 8%.

I remember buying a 4 pack and sharing it with my mate, we had two each and were absolutely trashed. We were around 17 years old at the time, possibly younger. I absolutely HATED it. Because of this, I assumed that regular Skol would also be quite strong. But at 2.8% it is basically water!

The idea that in Brazil, Skol is a sophisticated pale lager that is second only to Brahma in terms of popularity is absolutely mindblowing to me! Sort of like if you found out that the Kardashians enjoyed pork scratching, or if the Queen … drank Skol Super.

If you’re in the UK, then there are a lot of low alcohol alternatives to Skol. Or even some non-alcohol beers.

If you’re in Brazil, then there are thousands of beers similar to Skol. Brahma, Corona, Sol, San Miguel, Stella Artois, Kirin Ichiban, Kronenbourg 1664. It’s difficult to get too specific, as pilsner (which Skol is) is the most common beer style in the world!

Czech out some pilsners from Prague (see what I did there?) such as Pilsner Urquell, Budvar, or Staropramen. Alternatively, check out the German pilsners such as Veltins, Rothaus, Bitburger, Beck’s, or Flensburger.