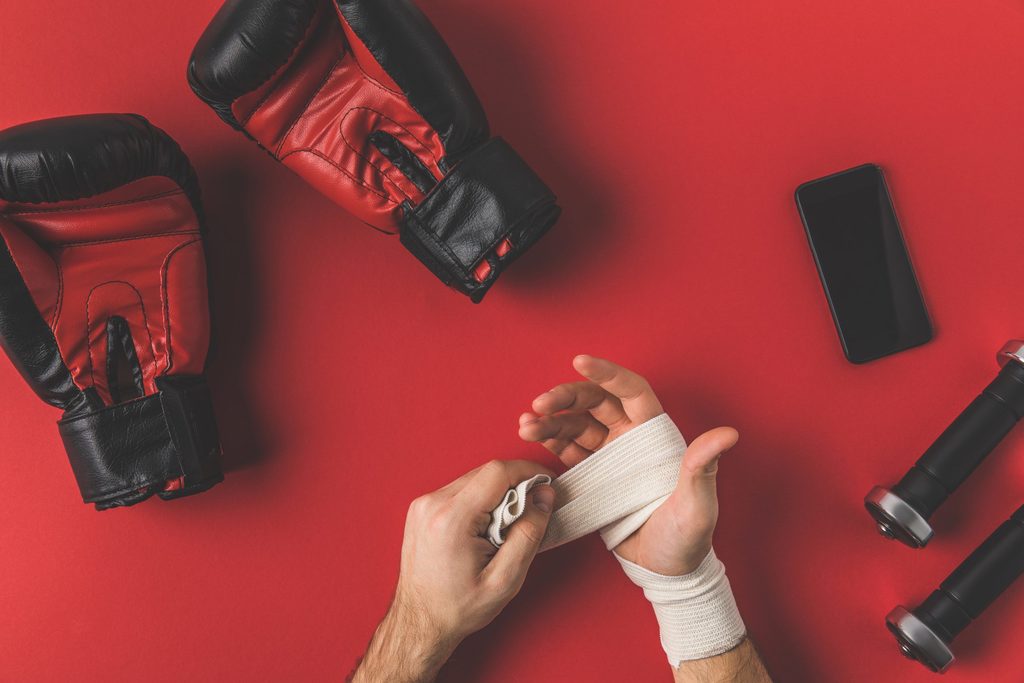 Will Bodybuilding Make You a Better Fighter?

For those of us brought up on a diet of WWE wrestling and 90s action movies, having the largest pecs seems like a good indicator of fighting ability. But how realistic is that? Looking at the top heavyweight boxers or MMA fighters and you will rarely see overly large muscles. Will bodybuilding make you a better fighter? Or will it negatively affect your fighting ability?

For a weight lifting novice, following a bodybuilding program may initially yield solid results. But long-term it is an impractical goal. Not only would a bodybuilder’s physique be too immobile for fighting, but the two forms of training would be impossible to perform simultaneously.

In this article, I will take a look at the pros and cons of combining bodybuilding and fighting.

Will Bodybuilding Make You a Better Fighter?

The issue is further complicated when we get into performance-enhancing drugs (PEDs), and natural vs pro. Way too many variables. That does not mean that this article cannot answer the question though. Here is a basic rundown of bodybuilding and fighting:

The problem with bodybuilding is not so much that bodybuilders are less mobile and not exactly fleet of foot, it is more to do with training schedules, nutrition, and the different goals of these two sports (if you consider bodybuilding a sport or not it is still athletic in nature).

It would be impossible to become the best sprinter in the world while also running marathons. The training would be crazy, your body would be pulled in two directions by the need to train both aerobically and anaerobically, and you would be working different muscle fibres.

The same is true for bodybuilding and fighting. As you will soon see.

What Makes a Good Fighter?

“He can have heart, he can hit harder and he can be stronger, but there’s no fighter smarter than me.”

There are many forms of fighting. With dozens of different martial arts, wrestling styles, and even a couple of boxing variations. But for the purposes of this article, we will look at boxing, MMA, and wrestling. All three forms of fighting are used in the Ultimate Fighting Championship (UFC), so this will work as our definition of fighting.

One interesting thing about fighting and bodybuilding is that all forms will involve calorie manipulation to make weight. Bodybuilders are well known to cut and bulk, and while fighters don’t go to the same extreme, they will have to drop weight or gain weight if changing weight divisions.

The most important requirement for any fighter is that they have great strength to weight ratio. If two boxers weigh 90kg but one has more muscle mass, then that boxer will be able to generate more power.

This isn’t such an issue in the heavyweight division as there is no upper limit for weight. If you want more power, you can get bigger. But in the lower divisions, this is massively important. 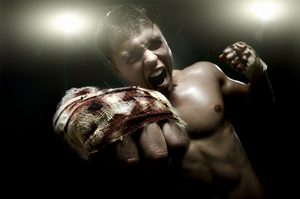 Other requirements for a good fighter are:

Now think about a traditional bodybuilding workout program and lifestyle. Does it help to build mobility? Agility? Endurance? No, not really. Nor does it help with reaction time, resilience, or strategy.

This means that if you were to follow a bodybuilding program you would ALSO have to supplement your workout with specific fighting-training.

The Benefits of Bodybuilding for Fighters

Look, the truth is that for a novice fighter, bodybuilding could be beneficial. For example, a young boxer who has just finished their growth spurt could be in serious need of packing on some muscle.

Following a bodybuilding diet and exercise program would be a good way to build some muscle and put on a bit of size. For optimal results though, you’d want the program to be a hybrid one.

Bodybuilding has many benefits that can be useful for fighters:

For the record, I am well aware that most bodybuilders could beat the absolute tar out of me. I’m not saying that bodybuilders wouldn’t be good fighters compared to your average man on the street.

But there is a reason why no professional bodybuilder has made it in the UFC (that I’m aware of). The closest there has been would be the WWE wrestlers who fought in the UFC. WWE wrestlers are similar to bodybuilders in their size and training styles.

In fact, they are probably the best argument that bodybuilding and fighting can co-exist. Except for a couple of things:

I’ll talk about the second point later in this article, but let’s address the first point. I don’t want to get into the whole “wrestling isn’t real” debate. It involves a lot of hard work and sacrifice, but it IS choreographed, and it does not involve being punched in the face.

Also, compared to bodybuilders, most wrestlers are closer in shape to athletes. They are smaller, more mobile, more agile, you get the idea.

Bodybuilders do not make good fighters because their muscles are built for size rather than strength. This makes their strength to weight ratio (see earlier) unfavourable. They are also pretty immobile (Kai Greene aside).

Most bodybuilders are very short, making them ideal for wrestling, but in boxing, their lack of reach would be immediately noticeable. Their weight to height ratio would see them being placed in the heavyweight division.

Big Raimy weighs 40kg more than Anthony Joshua, but Joshua is 8 inches taller. His reach would be ridiculous compared to Raimy’s. Sure, these aren’t the fairest comparisons. David Haye is probably a better example, as he was a Cruiserweight who went up in weight to heavyweight. He’s 6 ft 1 inches. Here he is fighting 7 ft Nikolai Valuev.

Granted, Haye won that fight. But it was one of the most difficult matches of his life and he was a much better boxer than Valuev. A height advantage in heavyweight boxing is very useful, and no professional bodybuilder is going to have that. 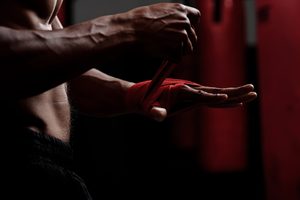 To become a seriously good fighter, how much time do you think you would need to dedicate per week? 20 hours? 30? You’ve got weight lifting, plyometrics, HIIT, skill-based workouts, heavy bag, speed bag, sparring, aerobic workouts. Then there is rest and recovery, diet, and sleep.

It’s no wonder that boxers amass such large coaching teams. MMA is catching up in this department as more money flows through it.

How many hours per week does it take to become a good bodybuilder? Not even a great one, just a good one? 10 hours? 20? It’s a lot. But it’s not just about time-management. It’s about workout volume.

There is only so much exercise that a person can perform per week, train for too long or at too high an intensity and you will suffer from overtraining. Or worse, rhabdomyolysis which a lot of CrossFitters can attest to.

The only way that WWE wrestlers manage to build so much muscle and still train for their time in the ring is through a very lax policy on drug testing. To be clear (I’m in no mood for a lawsuit), I’m not saying that all WWE wrestlers take PEDs. All I am saying is that they would be crazy not to!

“I would tell kids to train, say their prayers, and take their vitamins. But it wasn’t just vitamins I was taking…”

The reason why pro bodybuilders and natural bodybuilders look so different is that PEDs allow you to train harder and for longer without getting injured or overtraining.

There are two forms of bodybuilders: Natural and professional. The term professional isn’t really that useful, because many amateur bodybuilders will also be taking steroids and other PEDs. But you get the idea.

The funny thing is that “natural” bodybuilders are pretty obviously also taking steroids and PEDs, but they can’t be as blatant as the pros. But that’s a discussion for another article.

Fighters though? Not a chance! I’ve written before about the crazy hoops that athletes have to jump through to avoid being labelled a drug-cheat.

To become a professional fighter, a bodybuilder would have to give up all PEDs. Even then, it might not be enough. Their opponent could (justifiably) argue that all of the previous years of PED abuse has given them an unfair advantage.

Without the drugs, the bodybuilder would not be able to train for both sports simultaneously. It would be impossible. They’d also see a big drop in their bodybuilding career.

Do you want to be a great fighter? A great bodybuilder? Or do you want to be okay at fighting and have a decent body? For most men the third option is the best one. The original question for this article is will bodybuilding make you a better fighter? The answer is no.

But that doesn’t mean that you can’t become decent at both. You’ll just never become great at either if you try to have your cake and eat it. Not a big deal, you could put 100% of your efforts into either and still not come anywhere close to great. That’s life.

If you can accept the fact that you’ll only be decent at fighting or only have a good physique rather than a Sandow-winning physique then you can move on with your life and have some fun! Focus on bodybuilding, but attend a boxing club for your cardio.

Or vice versa. Train for amateur boxing, but craft a fantastic physique on the side. Just don’t dabble in steroids. It is completely unfair to your competitors if you are using PEDs before walking into a ring (or octagon).

If you are weak and don’t know how to fight, then bodybuilding will help make you a slightly better fighter. But other than that, bodybuilding and fighting are not a great combination. There is so much more to fighting than strength and muscle size.

The extra bulk that bodybuilding brings will actually make you a less effective fighter. Less mobile, less agile, slower, more tired (muscles raise your metabolism and burn more calories than any other tissue). Just not helpful.

That doesn’t mean that a bodybuilder couldn’t win in a fight against most people, just not against fighters. As with many things, if you want to get better at something, focus on doing exactly that. Don’t pick another discipline completely and hope that the skills are transferrable.