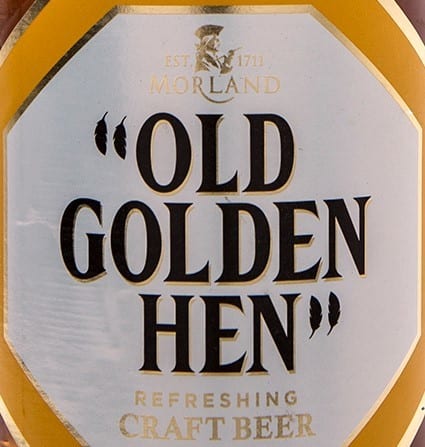 Old Golden Hen: Everything You Wanted to Know

There are 241 calories in a pint of Old Golden Hen (568ml). It is 4.1% abv. Due to Old Golden Hen containing malted barley, it cannot be considered gluten-free. Nor is it vegan, as the brewery uses isinglass to clarify their beers.

In this article, I will attempt to answer each of the above questions more thoroughly. I will also try to find you some similar beers to Old Golden Hen.

How Many Calories Are There in Old Golden Hen?

There were a lot of misleading calorie estimates out there for this beer, but I emailed Greene King directly and received the actual amount. Old Golden Hen contains 42.5 calories per 100ml. I used this information to find the measurements for a pint, a can, and a bottle.

How Much Alcohol is There in Old Golden Hen?

According to the Old Speckled Hen website, the alcohol content for Old Golden Hen is 4.1%. This does not change whether it is in a can, bottle, or if it is on draught. Usually, if an English ale is on tap the alcohol content is slightly lower than in a bottle. But that is not the case here.

No. Old Golden Hen is not vegan, at least that is the most likely scenario. As Old Golden Hen is a lot less well-known than Old Speckled Hen, it tends to get overlooked in articles about veganism. So, there isn’t a specific answer. However, all of the other beers in the range are not vegan-friendly, so I have no reason to believe that this one is.

What Beer is Similar to Old Golden Hen?

Old Golden Hen is an English Golden ale. This style of beer is somewhere between a lager and an English Pale ale. Nowhere near as carbonated as lager, but with a similar look and feel. It’s a great style of beer, and there are a lot of excellent alternatives out there.

Oakham Ales have an excellent golden ale called Inferno, I’ve talked before about my love for this brewery. They always hit the mark in my opinion. Then there is Hobgoblin Gold from Wychwood brewery, Brakspear Oxford Gold, Black Sheep Golden Ale, and Saltaire South Island.

Of course, you’ve also got the other beers brewed by Morland: Old Speckled Hen, Old Crafty Hen, and Hen’s tooth. While these are different beers, there is still a similarity between them. If you enjoy this type of beer, then you may be interested in ruby ales such as Hobgoblin, or pale ales such as Fuller’s London Pride.