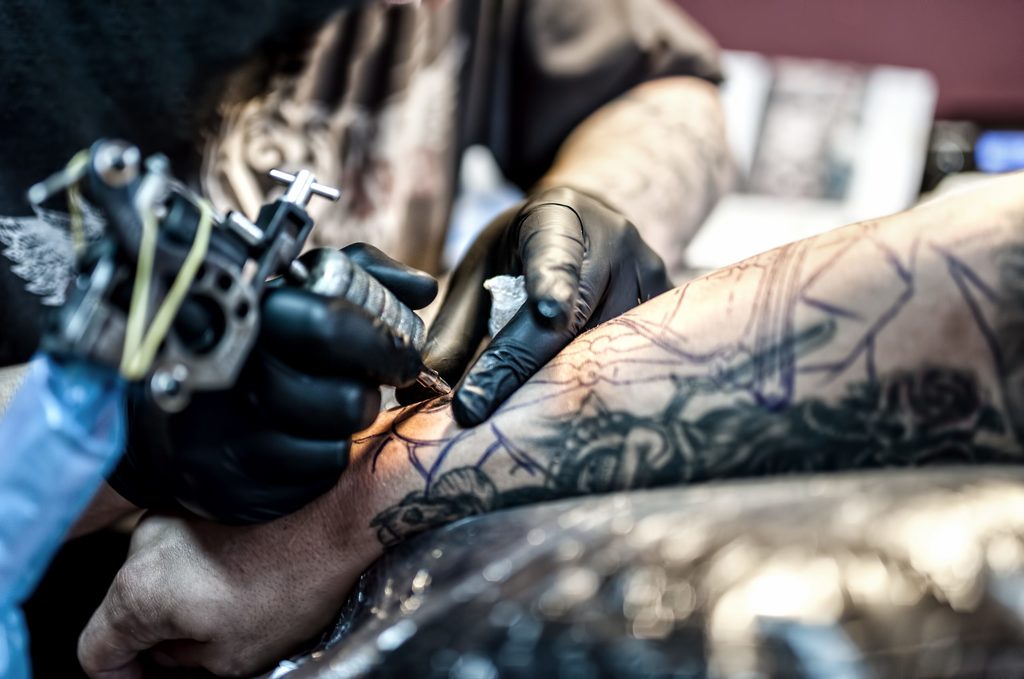 Lifting and getting tattoos are two hobbies that many people share. Hell, as far as I can tell, that’s how most people appear to spend their time in prison. But will bodybuilding ruin tattoos? Could enlarged muscles lead to the tattoo looking stretched and wrong? Let’s find out.

It is unlikely that bodybuilding will ruin your tattoos. Even if you make huge gains, the chances of your tattoos becoming distorted are very low. Avoiding areas such as the stomach, inner arms, ribs, and hips may lower the chances of distortion even further.

In this article, I am going to explain why bodybuilding is unlikely to ruin your tattoos, but also look at some of the other issues that tattooed bodybuilders may experience.

When it comes to bodybuilding, there are many different factors to consider: How seriously are you going to take it? How much change is needed? Are you going to use anabolic steroids or not? These all affect the answer.

If you’re going from stick thin to Mr Olympia within a ten year period, then your tattoos have a greater chance of becoming distorted than you would if you went from regular guy to a decently large natural bodybuilder.

Finally, you need to think about whether the tattoos you are getting will hinder your bodybuilding career. Obviously, most people bodybuild for their own health and enjoyment, but many would want to compete. Could your tattoo prevent you from placing in a competition? It’s certainly possible.

We’ll look at this more in a bit, but it’s worth considering. Bodybuilding may not ruin your tattoos, but tattoos could ruin your bodybuilding career. Okay, ruin is a strong term. That’s the downside of tattoos though, and I speak as someone who has two. They are life-changing decisions, that may have repercussions down the line.

The main reason why bodybuilding is unlikely to affect your tattoos is the way your skin works. Remember, a tattoo is placed on the skin, not on the muscle itself. Skin is very elastic in nature and can adapt to modest changes in size.

The chest, shoulders, and arms are all common places for tattoos, and they are also areas that are targeted by a lot of bodybuilders. Perhaps too much! Arms can grow quite a bit in size, but nowhere near enough to distort a tattoo (unless it is poorly designed or text-based).

The same thing goes for shoulders. The chest can increase quite a bit in size, but the shape doesn’t change much. Tattoos on the chest are usually larger in size anyway, so are unlikely to be affected.

A good way of looking at things is to look at where stretch marks show up in people who have gained or lost weight rapidly. On the arms, stretch marks tend to focus around the inner arm, up near the armpit.

You will find stretch marks around the abdomen, hips, glutes, and thighs. Areas around the lower back and lats are also susceptible. Avoiding these areas may help lower the risks even further.

Though it should be noted that stretch marks are caused by rapid fat gain or fat loss, rather than muscle gain. If you are following a bodybuilding program properly, you shouldn’t expect large gains in fat.

Unless you are following a “dirty” bulk where you eat loads of high-calorie junk food in an effort to gain weight. Dirty bulks are bad ideas anyway, but saving your tattoos is just another reason to avoid them and stick to clean bulks.

What Type of Tattoo Should I Avoid?

Anecdotally (there doesn’t appear to have been any studies on tattoos and muscle mass so we’re going to have to deal with a lot of anecdotes) the tattoos that are most affected appear to be ones that involve writing, or ones that involve straight lines.

This makes sense if you think about it. A tattoo of a beach ball is going to survive even a tripling in size without noticeably changing as the shape is spherical. On the other hand, a sentence written in calligraphy may become noticeably distorted if your arm becomes twice as big as it was before.

Tattoos that are situated along the inner arm (near the armpit), abdomen, hips, glutes, inner thighs (why?), and upper back, may not be the best idea. Instead, look for areas where muscle or fat mass is unlikely to change too severely.

Then, of course, there are the tattoos that you should avoid anyway. White Power tattoos tend to get pretty embarrassing the older you get, girlfriends’ names, teardrop tattoos, kiss tattoos on your neck, whatever Post Malone is doing!

Also, think about tattoos that may obscure your physique (I talk more about this later). A huge sleeve tattoo can look amazing, but it will also cover all of your upper and lower arm muscles as well as your deltoids.

*Just kidding, apart from face tattoos, there’s definitely a wild side to anyone who tattoos their face!

Can I Train Immediately After Getting a Tattoo?

Let’s say that you’ve decided to get a tattoo, is it possible to go straight to the gym afterwards? Not really. While tattoos are rightly considered art by many people, your body has absolutely no way of knowing this!

Your body will react to a tattoo in the same way that it would to injury or illness. With a lot of inflammation. That means slight swelling, reddening of the skin, and the formation of a scab. Working out while in this condition is not a great idea, as you need to give your body time to recover, repair, and adjust.

From a practical standpoint, you’ll want to avoid training anyway as your mobility will be down. It will hurt, no matter what your friend says. But more importantly, the affected area will be stiff, meaning that you won’t be able to get a proper range of motion during exercises that target the area.

A week to ten days away from the weights section of the gym is probably a good idea. Cardio should be okay, provided it isn’t affecting the tattoo area. Swimming should be avoided!

Looking After Your Tattoo

Treat your tattoo like you would a burn or a muscular injury. Focus on rest, recovery, and recuperation, rather than lifting weights. Your body will thank you. If you MUST workout, then avoid the area where your tattoo is situated.

If your tattoo is on your chest, shoulders, or arms, then avoid most upper body exercises and lower body exercises that may exacerbate the issue. For example, a barbell squat would involve resting a barbell on your shoulders and upper back, so a tattoo there would be affected.

If your tattoo is on your legs, then you can probably get away with some upper body exercises. But again, be careful of irritating the area while climbing onto a bench or resting a dumbbell pre-bench press.

If your tattoo is around your abdomen, ribs, or lower back, then it is definitely advisable to avoid exercising altogether, as there is no way to avoid irritating the area.

Will Getting Tattoos Ruin My Bodybuilding Chances?

This is the big issue that nobody really talks about. Professional (and natural) bodybuilding competitions are 90% aesthetically judged. How your muscles look is vitally important. Covering those muscles with tattoos may be a strategic error.

The IFBB does not ban tattoos, and legally I don’t think they could if they wanted to. But it is still rare to see IFBB pros sporting tattoos. The only bodybuilder that I can think of who has done well with tattoos is Roelly Winklaar who came 3rd in Mr Olympia 2018, and 5th in 2019.

Winklaar’s tattoo is quite hard to see, just writing across his abdomen, but he is certainly an example of a bodybuilder who has gone far with tattoos. But the fact is that tattoos in professional bodybuilding are rare.

There are several reasons why this is:

Lee Priest is a good example of someone who was tattoo-free while competing but afterwards went tattoo mad. I think that most people would agree that after a certain point his tattoos began to look bad.

Lee himself appears to agree, deciding to remove the face tattoo recently. But Lee’s other tattoos looked pretty good. He was a good argument for tattooed bodybuilders, and because he wasn’t looking to build more muscle in his retirement, he had little to fear.

He certainly lost a bit of definition. But that is going to happen anyway as the testosterone levels lower and age catches up with him.

Perhaps this is an option for you wannabe-pros. Save the tattoos until after you’ve reached your goal. Sure, that could be 10 years from now, but if you are completely serious about becoming one of the best bodybuilders in the world, then this is just another sacrifice you’ll have to make.

Or get yourself a hand tattoo, not even the strictest bodybuilding judge is going to mark you down for that!

For 90% of bodybuilders, a tattoo is not going to affect them at all. As they are unlikely to ever compete in an IFBB tournament. The idea that getting one will hurt their chances of winning is laughable.

If you’re not an IFBB Pro, then the chances of your muscles growing to a size that could distort the tattoos themselves are minuscule. Unless your tattoos are placed in certain areas that we discussed earlier.

The most likely cause of distorted tattoos is going to be fat gain rather than muscle gain, and it should be remembered that while many bodybuilders worry about this, few non-lifters ever stop to consider whether obesity could affect their tattoos!

Getting a tattoo is an important decision to make, and one that should not be taken lightly. I have a tattoo of the 3 lions on my shoulder that I don’t particularly regret, but nor do I cherish it. If I were to go back in time I would probably avoid getting it and spend the money on beer instead.

On the other hand, I got a tattoo of Jimi Hendrix when I was 23. And ten years later I’m still pleased with it (though I constantly forget I have it). The first tattoo involved 5 minutes of thinking, while the second involved a lot of soul-searching, a lot of research, and a consultation with the artist beforehand.

If you’re interested in getting a tattoo, then I’d recommend the latter approach. But don’t worry about massive muscle increases affecting the design in years to come. The truth is that you are unlikely to gain the kind of muscle mass that would cause a problem. Even if you’re really successful as a bodybuilder.