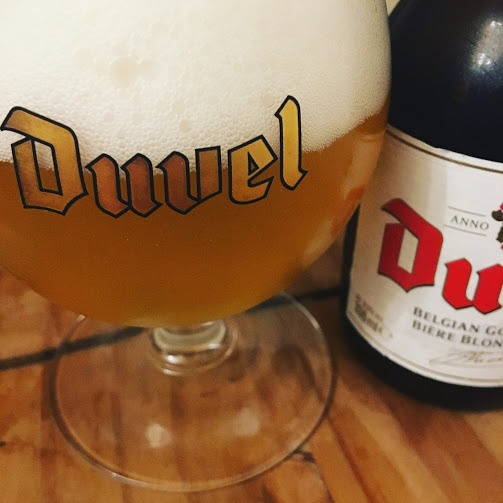 Duvel Fact File: Everything You Wanted to Know

Did you know that Duvel means “Devil” in Flemish? It’s an apt name, because only the Devil himself could have made a beer this strong so drinkable! But how many calories are there in Duvel? How strong is it? Is Duvel gluten-free? Or vegan? What beer is similar to Duvel? Let’s find out.

There are 211 calories in a 330ml bottle of Duvel. It is 8.5% abv. As it is brewed with malted barley, it cannot be gluten-free. Duvel does not use isinglass or other animal products so is vegan-friendly.

In this article, I will attempt to answer all the questions raised earlier in more detail. I will also talk about similar beers so that you can increase your range of Belgian beers.

How Many Calories Are There in Duvel?

There are 211 calories in a 330ml bottle of Duvel. The Duvel website provides this information (for which I love them). There are 64 calories per 100ml. This is a LOT. If you were mad enough to drink a standard pint of the stuff it would be 364 calories!

The reason for this astronomic calorie count is the alcohol content. Alcohol contains around 7 calories per gram, so the stronger the beer, the higher the calories.

How Much Alcohol is There in Duvel?

Duvel is 8.5% abv, which to someone who has not experienced Belgian beer must seem insanely high. But actually, this is fairly standard for Belgian beers. Indeed, some of the Quadrupels can be as high as 14% abv. Check out my article on Tripels and Quadrupels to learn more about this.

Sadly, as with almost all beer, Duvel is NOT gluten-free. It is brewed with malted barley which is a source of gluten. There does not appear to be a gluten-free version of the beer either.

Yes! Unlike most English ales, Belgian beers rarely use isinglass finings or similar to remove sediment and clarify. That means that they are free from animal products and are vegan-friendly. Check out my article on isinglass and vegan beers to learn more.

What Beer is Similar to Duvel?

If you love Duvel then you are in luck! Belgium has many similar beers that are equally excellent. Tripel Karmeliet is a superb choice and is the same strength as Duvel. Then you’ve got Affligem blonde, a beer that I’ve talked about numerous times.

La Chouffe Blonde is a fun choice and is brewed by the same brewery. You’ve also got Kwak, that is served in an amazing glass, and St Feuillien Blonde which is also well worth checking out.

Leffe Blonde is a great shout, and most people will have heard of it. For many of us, Leffe was our first introduction to Belgian beer. You’ve also got Grimbergen triple.

As you can probably tell, I’m a big Belgian beer fan, and I really enjoy introducing people to their wonderful beers. But what you’ve got to understand is that Belgian beer-drinking culture is very different from German, English, or Czech drinking culture.

The Belgians enjoy drinking very strong beers slowly and in more moderate amounts. Their beer is consumed in the same way that French people drink wine. It’s an occasion.

Actually, if I’ve learned anything it’s that Belgians drink like the rest of Europe. Their most popular beer is Jupiler lager. But there are still some Belgians who drink these fantastic Belgian beers in a cafe while in conversation about philosophy or something.