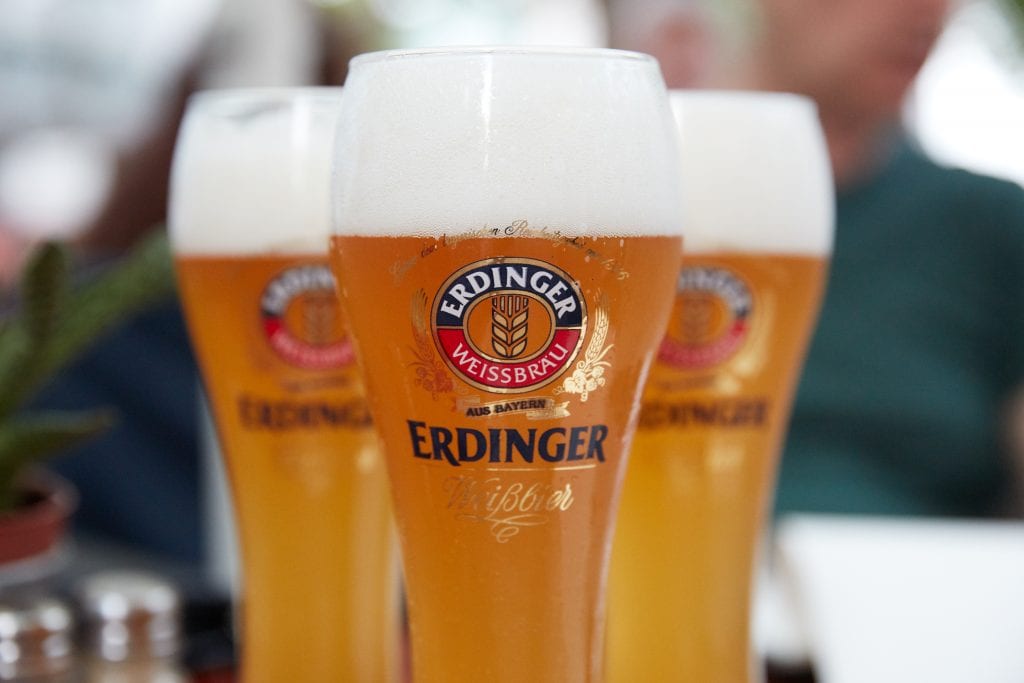 Erdinger Fact File: Everything You Wanted to Know

Erdinger Weissbier is one of the best-known wheat beers in the world. But how many calories are there in Erdinger? How strong is it? Is Erdinger gluten-free? Or vegan? What beer is similar to Erdinger? Let’s find out.

There are 220 calories in a 500ml bottle of Erdinger Weissbier. Its alcohol content is 5.3% abv. As Erdinger Weissbier is brewed with both barley and wheat malt, it is definitely not gluten-free. It is however vegan friendly.

In this article, I will be taking an in-depth look at all of the questions raised above. I will also talk about wheat beers that are similar to Erdinger Weissbier in case you fancy something a little different.

How Many Calories Are There in Erdinger?

Amazingly, the Erdinger website tells us straight up, there are 44 calories per 100ml. I’ve written about 100 articles on the calorie contents of different beers, and it is often an exercise in frustration trying to find the answer! So, good on Erdinger for making it so ridiculously easy.

As far as I can tell, Erdinger is served in 500ml glasses rather than pint glasses (568ml). If you are drinking Erdinger by the pint then it is 500 calories.

How Much Alcohol is There in Erdinger?

Erdinger Weissbier is 5.3% abv. Erdinger also offers an excellent alcohol-free version of their Weissbier, which I have accidentally ordered before (I was furious at myself). One of the better non-alcoholic beers out there. You can check out a review of alcohol-free Erdinger by Phil from openingthebottle.com here.

If you are gluten-intolerant or a coeliac, then you are probably going to have to get used to not drinking wheat beers. This is because they contain wheat and barley, both of which contain gluten.

To learn more about isinglass and vegan beer, check out my article on the subject here.

What Beer is Similar to Erdinger?

As far as I can tell, Weissbier is also unfiltered.

To complicate matters further, you’ve got Witbier which is a wheat beer brewed in Belgium and the Netherlands. These are more flavourful as they are exempt from the Reinheitsgebot and can therefore add in coriander, cloves, orange peel, and similar ingredients. German wheat beers get all their flavours from the yeasts they use.

If you are looking for beers that are very similar to Erdinger, you might want to try Schneider Weisse, Paulaner, Augustiner, Hofbrau, and Hacker-Pschorr.

Alternatively, you can try the Belgian Witbier Hoegaarden, or its American counterpart Blue Moon.