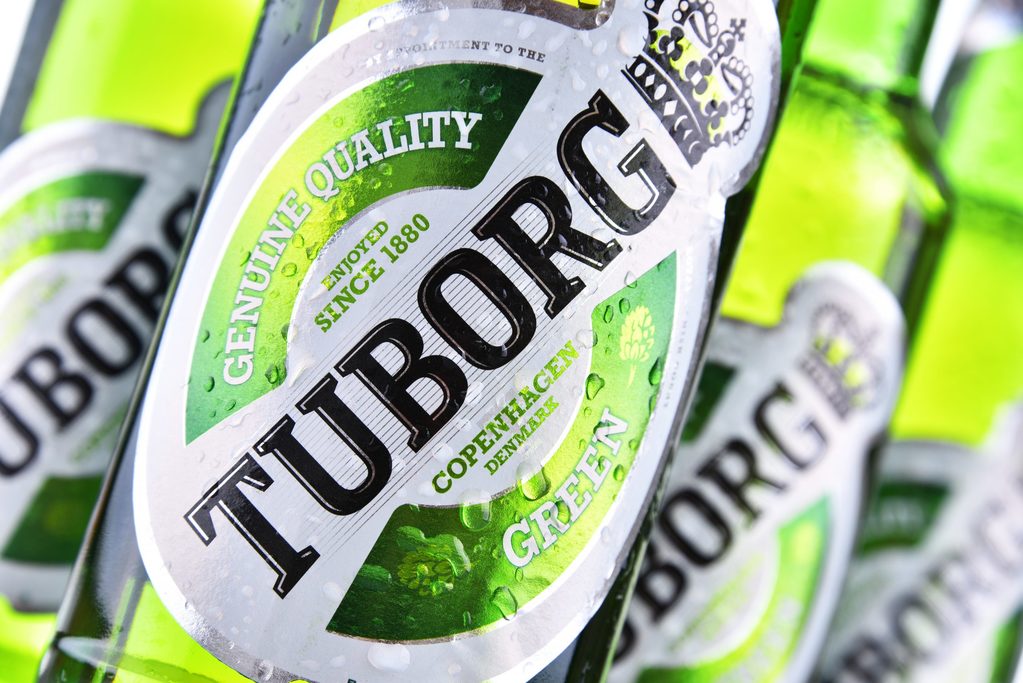 Tuborg Fact File: Everything You Wanted to Know

Tuborg is not quite as famous as its fellow Danish beer Carlsberg, but its still one of the biggest selling pilsners in the world! But how many calories are there in a pint of Tuborg? How strong is it? Is Tuborg gluten-free? Or vegan? What beer is similar to Tuborg? Let’s find out.

There are 187 calories in a pint of Tuborg (568ml) in the UK (239 calories outside). Tuborg contains 4% abv in the UK, and 4.6% in other countries. Due to Tuborg being brewed with barley, it cannot be gluten-free. Tuborg is vegan friendly.

In this article, I will take a closer look at all of the preceding questions. I will also look at beers that are similar to Tuborg.

How Many Calories Are There in a Pint of Tuborg?

Thanks to having a lower alcohol percentage in the UK than anywhere else, Tuborg in the UK is lower in calories. Just 33 calories per 100ml compared to 42 internationally. Because of this, I will have to provide calories for UK Tuborg as well as International Tuborg.

I don’t know about my fellow UK readers, but I for one am a little fed up with us getting weaker beer than every other country in the world! After all these years of making fun out of Americans for drinking weak beer. What a turnaround.

How Much Alcohol is There in a Pint of Tuborg?

As I mentioned above, the alcohol content differs between Tuborg in the UK and Tuborg internationally. UK Tuborg contains 4% abv, while internationally, Tuborg is 4.6% abv.

No, sadly Tuborg cannot be considered gluten-free. This is because it is brewed with malted barley which contains gluten. There does not appear to be a gluten-free version of Tuborg out yet, but this may change in the future as more and more breweries try to increase their market share.

Yes, Tuborg is vegan. This is because it does not use animal products such as isinglass finings to filter yeast and sediment out of the beer. If you would like to learn more about isinglass finings and how they affect vegan beer drinkers check out my article on the subject.

What Beer is Similar to Tuborg?

The most obvious beer to mention would be Carlsberg, both beers are brewed by the same people (or at least owned by them). Both are pale lagers, pilsners, that are brewed in Denmark. Then you’ve got FAXE, my favourite Danish beer which you can often find in UK supermarkets inside a litre-sized can!

Then you’ve got North German pilsners, which are often brewed in the same way. Flensburger, Beck’s, Holsten Pils, are great examples of North German beers that are very similar to their Danish neighbours’. Check out my article “What beer to drink in Germany?” to find similar pilsners and a whole host of other beer styles.

You have also got Czech pilsners, that inspired German and Danish brewers. Pilsner Urquell, Staropramen, Kozel, and Budvar to name just a few.