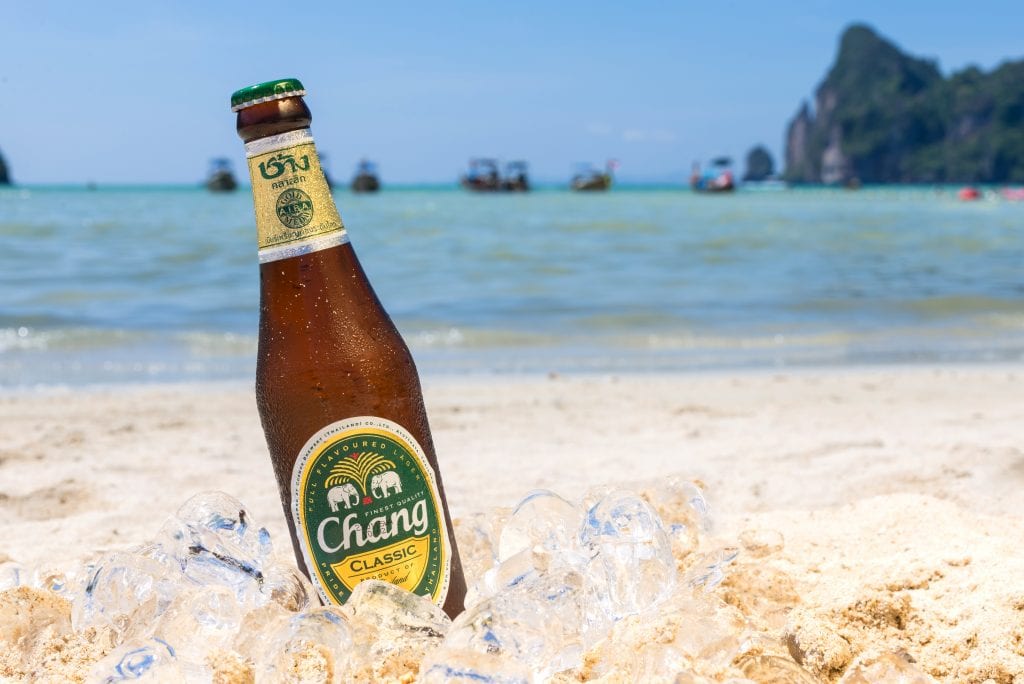 Chang Beer Fact File: Everything You Wanted to Know

Chang beer is one of the most well-known Thai beers, in the UK this is mostly down to its sponsorship of Everton FC. But how many calories are there in Chang? How strong is it? Is Chang gluten-free? Or vegan? What beer is similar to Chang? Let’s find out.

There are 200 calories in a 500ml can of Chang beer. It is 5% abv. Chang is brewed with malted barley so cannot be gluten-free. Chang beer is vegan-friendly, as it does not contain any animal products.

In this article, I will attempt to thoroughly answer all of the questions raised above. I will also talk about beers that are similar to Chang, in case you fancy a change.

How Many Calories Are There in Chang?

I have emailed Chang to get a definite answer about this because the website does not state the calorie content anywhere. After two weeks of waiting, I have my answer courtesy of their commercial director. Chang beer contains 40 calories per 100ml. Using this information, I can provide accurate calorie values for the following beers:

Just an FYI, all of the information online appears to be wrong! It seems like none of the calorie calculators actually bothered to contact Chang regarding their calories. It’s very frustrating, as you don’t know who to trust when it comes to beer calories.

How Much Alcohol is There in Chang?

Chang is 5% abv. This is pretty standard for pilsners. There is currently no alcohol-free version of Chang.

No. Chang is brewed with malted barley which contains gluten. It cannot be gluten-free. There is currently no gluten-free version of Chang.

Yes. Because Chang does not use isinglass finings (or similar) it can be classed as vegan. Check out my article on whether beer is vegan or not to learn more about isinglass.

What Beer is Similar to Chang?

The most obvious place to look for beers that are similar to Chang is Thailand. You’ve got Singha and Leo. Then there is the Singaporean Tiger beer and Chinese beers such as Tsingtao and Pearl River. Japanese beers are also similar; Asahi Super Dry, Kirin Ichiban, and Sapporo. Check out my article on beer in Japan to learn more about their selection.

Alternatively, you can look at pilsners in Germany such as Veltins, Beck’s, Rothaus, Bitburger, and Holstein Pils. Or Czech beers like Staropramen, Kozel, and Pilsner Urquell. Check out my article on German beers to learn more about pilsners.

To be honest, many pilsners across the world taste similar. I have enjoyed Chang when I’ve had it, but put a blindfold on me and get me to pick it out of a lineup and I would fail miserably. There are good and bad pilsners, but most are middle of the road.

Chang is well made, and you are unlikely to have a bad time drinking it. But you’re not going to see many people who will only drink Chang in the same way that people only drink Guinness.