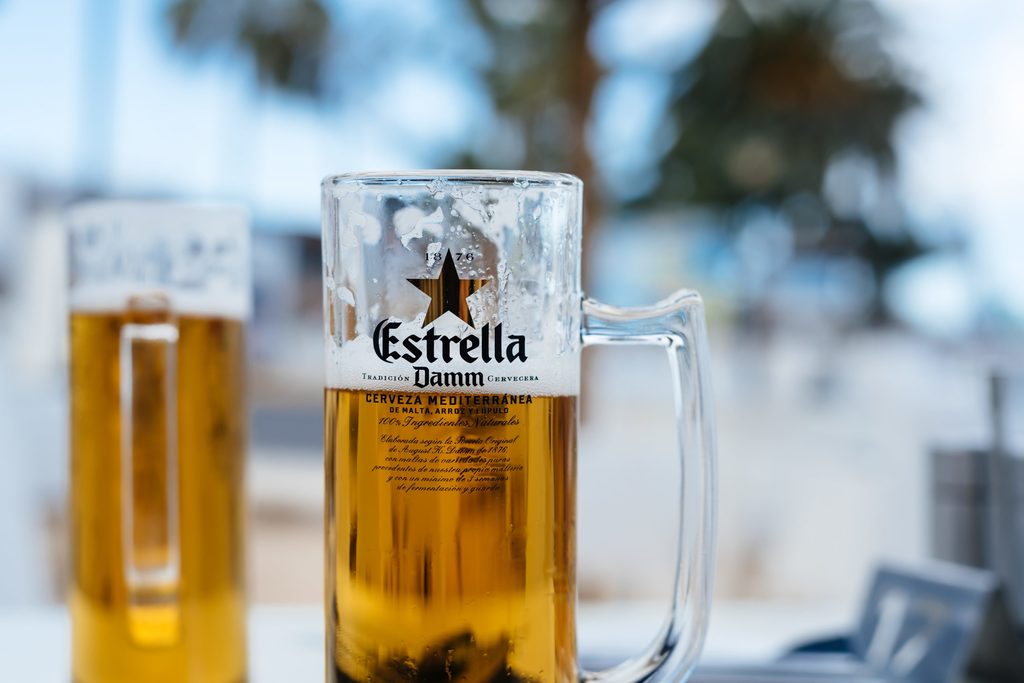 Estrella Damm: Everything You Wanted to Know

Estrella Damm is one of the best beers in Spain, and can be found in every Tapas restaurant in the UK. But how many calories are there in a pint of Estrella Damm? How strong is it? Is Estrella Damm gluten-free? Or vegan? What beer is similar to Estrella Damm? Let’s find out.

There are 284 calories in a pint of Estrella Damm (568ml). The beer is 4.6% abv in the UK, and 5.4% internationally. Estrella Damm is not gluten-free as it contains malted barley. However, it is vegan.

In this article, I will try to answer each of the above questions more thoroughly. I will also compare Estrella Damm to similar beers in case you fancy something different.

How Many Calories Are There in a Pint of Estrella Damm?

The more articles I write about calories in beer, the more I appreciate brewers that provide the calorie information for their beer on their websites. Estrella Damm is one such blessed brewery. According to the website, Estrella Damm contains 50 calories per 100ml. Using this information, I can find the calorie values for the different serving sizes.

Sadly not, Estrella Damm is brewed with malted barley (like almost every other beer in Europe). Barley contains gluten, so the beer cannot be gluten-free. However, the company brews a gluten-free version called Estrella Damm Daura.

Yes. Because Estrella Damm does not use isinglass or similar collagen-based methods to clarify the beer it can be described as vegan-friendly. To find out more about isinglass and its effect on vegan beer-drinking, check out my article.

What Beer is Similar to Estrella Damm?

Estrella Damm is a pale lager from Spain. Immediately this makes me think of similar Spanish lagers such as San Miguel, CruzCampo, Mahou and Estrella Galicia (actually a completely different brewery). Then you’ve got Portuguese beers such as Sagres and Super Bock. Check out my article on Beer in Portugal to learn more.

But why stop at the Iberian peninsular? Neighbours France sell Kronenbourg 1664 which is another pale lager. Or you have Italian beers Nastro Azurro, Birra Moretti, and Birra Messina. Or you’ve got the Dutch lagers such as Amstel or Heineken.

The two best countries for pale lagers (pilsners) would be Germany and the Czech Republic. Both countries can stake a claim to inventing the style (Czech Republic) or sharing the brewing secrets with the world at large (Germany).

German pilsners such as Beck’s, Veltins, Bitburger, Warsteiner, Flensburger, and Holstein pils would all be a great alternative to Estrella Damm. Check out my article on Beer in Germany to learn more.

The Czech Republic can lay claim to inventing pilsners, and they have one of the oldest pilsner breweries in the world Pilsner Urquell. You’ve also got Staropramen, Kozel, Budvar, and Pravha. All of these beers are more than a match for Estrella Damm, and they really are worth checking out if you can find them.

Of course, Estrella Damm is an excellent pale lager. Just because I think there are some great alternatives, it does not mean that I don’t like the beer itself. It is possibly my favourite beer in Spain or Portugal – though I often change my mind on this. It certainly has the coolest beer glass, which definitely affects my opinion!