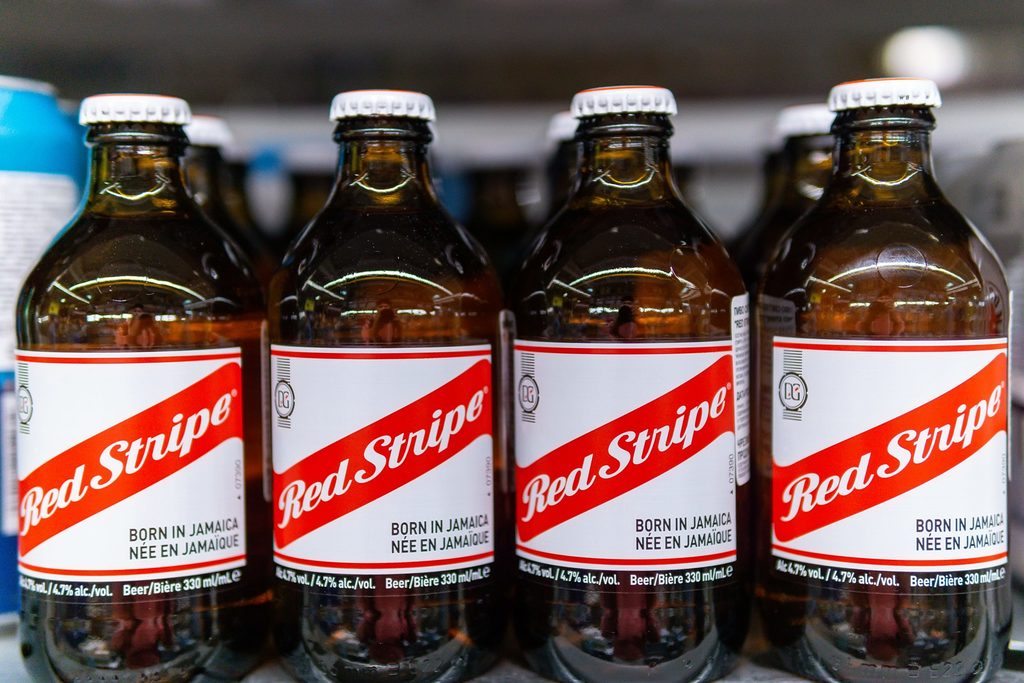 Red Stripe Fact File: Everything You Wanted to Know

Red Stripe is an excellent lager brewed in Jamaica and popular worldwide. But how many calories are there in Red Stripe? How strong is it? Is Red Stripe gluten-free? Or vegan? What beer is similar to Red Stripe? Let’s find out.

There are 239 calories in a pint of Red Stripe (568ml). Red Stripe is 4.7% abv. Due to it being brewed with barley, Red Stripe cannot be considered gluten-free. However, it is vegan.

In this article, I will answer all of the above questions, but in more detail. I will also talk about beers that I think are a close match to Red Stripe. In case you fancy increasing the range of beers you try.

How Many Calories Are There in Red Stripe?

The Red Stripe website is perfect for giving calorie values for the different serving sizes, though they do use American measurements.

Thanks to the website, I know that there are 42 calories per 100ml in Red Stripe. Using that information, I can give you the values for cans, bottles, and pints.

How Much Alcohol is There in Red Stripe?

Red Stripe contains 4.7% alcohol, this appears to be the same whether it is in a can, bottle, or on draught (something that is not always the case with beer). Being 4.7% abv is fairly usual for a lager, maybe a little on the low side.

Red Stripe is not gluten-free. It is brewed with malted barley, which contains gluten. There isn’t currently a gluten-free version of Red Stripe either, which is something that a number of popular beers have started offering.

Most commercial lagers tend to be vegan, this is because they do not tend to use isinglass or similar animal products to clarify their beers and remove sediment and yeast. Red Stripe is no exception. Meaning that you can drink their beer guilt-free if you happen to be vegan.

To learn more about isinglass and how it affects the vegan-status of your favourite beers, check out my article on the subject.

What Beer is Similar to Red Stripe?

Red Stripe is a pale lager (pilsner). That makes it the most common beer style in the world. Which is good news if you happen to love Red Stripe and want something similar!

There are a few options, usually, I recommend similar beers from the same country. But hand on heart, I don’t know of any other beers brewed in Jamaica. Other than Dragon Stout, but that is nothing like Red Stripe.

Your first port of call could be Spanish beers such as San Miguel or Estrella Damm, or you have got Mexican beers such as Corona or Sol. Then there are French and Belgian lagers such as Kronenbourg 1664 and Stella Artois. Dutch beers such as Amstel, Grolsch, or Heineken. Or Danish beers like Carlsberg, Tuborg, or FAXE.

But personally? I’d go German or Czech. Between them, these two countries invented the pilsner style and exported it to the world. German pilsners such as Veltins, Jever, Flensburger, Bitburger, or Beck’s are great. Then you’ve got similar beer styles such as the Marzens drunk at Oktoberfest (Spaten, Paulaner, Lowenbrau etc) and Helles beers from breweries such as ABK.

Check out my article on Beer in Germany to learn more about the different German beers available.

There are many Czech beers that deserve to be mentioned here; Staropramen, Budvar, Pravha, Kozel, and Pilsner Urquell all would be fantastic replacements for a Red Stripe if you fancy a change.